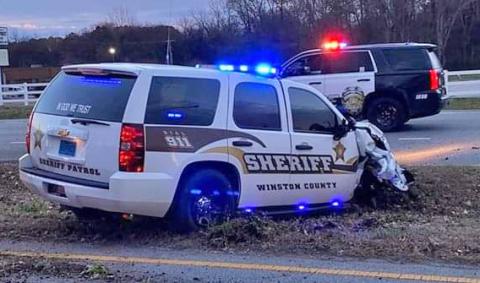 “I do not believe in cover ups or sweeping issues under the rug. I told the citizens of Winston County I would keep them informed after my appointment”, Sheriff Moore said. "I had an incident yesterday evening at the sheriff’s office that I will explain. Around 4 p.m., all my deputies, investigators, chief deputy and myself began our monthly safety training meeting. After our meeting was finished around 5 p.m., we discovered a trustee had driven off in one of the sheriff’s office patrol vehicles.

"At that time, we locked down the jail and compound and discovered the trustee, Wesley Aldridge, who was working as the shop mechanic, was the only one missing. Dispatch informed me that Decatur Police had Aldridge stopped on Highway 31, just east of Decatur. Myself, Chief Deputy Rodgers, Deputy Jonathan Oliver, Deputy Josh Silas and Investigator Caleb Snoddy headed to Decatur to help and assist Decatur Police and begin conducting our investigation of the incident.

"After arriving on the scene, we found Aldridge had wrecked the patrol vehicle and sideswiped another vehicle. Decatur Police had Aldridge under arrest and in custody. No one was seriously injured. The person in the vehicle Aldridge sideswiped was taken to a local hospital for observation.

“Thank God no one was seriously injured”, Moore said.

No deputy or sheriff employee was involved.

“He will spend years in prison," Moore said. “I will not rest until that happens. I will do everything I can to speed the process.” Decatur Police has Aldridge in custody now.

"We arrived back at the jail and conducted our investigation on the grounds of the jail. As a result, four inmates from work release and two trustees were placed back into jail. These inmates will no longer be on work release or receive trustee status.

"The location of our jail makes it hard to secure the compound like it should be, but security is a huge concern with me. I want to sit down with the county commission and work with them on more fencing.

“The vehicle that Aldridge wrecked was one of the older models, but still in use”. Moore said.

“This case is still under investigation by the Decatur Police and the Winston County Sheriff’s Office,” Moore said.

* When someone is accused of a crime, it is merely an accusation until or unless the person is proven guilty in a court of law.