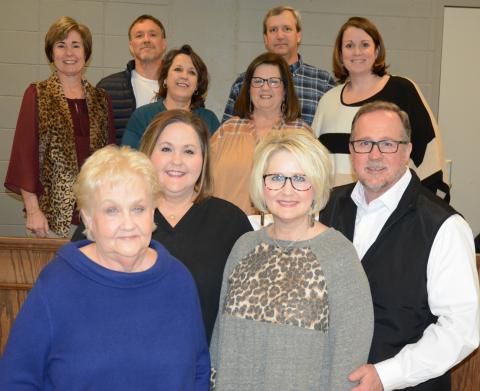 HALEYVILLE  - The Haleyville Board of Education meeting Tuesday, Feb. 25, proved to be both emotional and rewarding for Chere Fetter, director of instructional services, who was honored with this month’s Serve with Pride award.
Each month, a member of faculty or communication, who has made an impact in the lives of students and the Haleyville City school system as a whole, are recognized with the Serve with Pride award.
Principals from each school in the Haleyville district also name certain students with the Serve with Pride award, especially those who have the same positive traits as the award recipient.
HCS Superintendent Dr. Holly Sutherland said the decision of naming Fetter for the award came from not only teachers but students and community members.
Fetter began service at HCS in 1995, serving in a variety of roles from classroom teacher, assistant principal, instructional coach, interim high school principal last year to her most recent title as federal programs coordinator and director of instructional services.
“She has many hats,” Dr. Sutherland noted. “She is one of those people that anytime you have a question or need to know how things have gone in the past, or you just want to have that sounding board, she is there for you.
“She does so many things for us and is so supportive of everyone,” Dr. Sutherland pointed. “Her special touch is just all over these campuses, and it will be for a long time.”
Middle School Principal Bo Wilcoxson, whom Fetter worked beside as his assistant principal, noted she is one of the best educators he has ever worked with. She is a hard worker, loves all students and is a great team member, he related.
“She is just a delightful person,” Wilcoxson told the audience before presenting the Serve with Pride awards.
“It was a very good learning experience for me, when she was at the middle school, because she just knows so much about her job and her role in education, and I just appreciate everything she has ever done for me,” Wilcoxson added.
Elementary Principal Christy Bice worked in a variety of capacities with Fetter over the last 14 years.
“She has devoted her time and efforts to our schools and our students,” Bice had said. “Even though she (lived) outside our zip code, her heart has always been with Haleyville City Schools.”
Bice when presenting her awards to certain students, noted what an honor it was to present in honor of someone who has meant so much to her.
“She is a perfect example of someone who serves with pride,” Bice said. “Just going above and beyond in an effort of making our schools better and our community better.”
High School Principal Davey Reed worked with Fetter when he first came to HCS. Fetter had worked as high school interium principal before Reed was hired.
“She was very helpful and very kind  and she wanted to get me off on the right foot,” Reed said.
“She would always take students that maybe needed some special consideration or just some love and she would show them that love,” Reed added.
Center of Technology Director John McCullar has worked with Fetter through the years. “I appreciate all the help she has given me through the years, and we share the same birthday,” McCullar laughed.
“I really had no idea that this was going to happen tonight,” Fetter said as she stood before the audience. “Dr. Sutherland text me I guess Friday and said, ‘I need you to be at the board meeting.’ Ok what do I need to do?”
Fetter said instructions were to just bring herself to the meeting.
“Thank you so much. It’s an honor. Over my years at Haleyville, I had lots of support,” Fetter added.
At this point, Fetter teared up and with a broken voice continued, “Haleyville is my heart, and I love it, even though  I don’t live here, Haleyville is my heart.”
This statement met resounding applause from the audience.
Students who received the Chere Fetter Serve with Pride award included: Elementary School: Gracie Wakefield and Brolyn Grice, presented by Bice;
Middle School: Brodie Britnell and Peyton Bailey, presented by Wilcoxson;
High School: Icsel Marchant and Eli Wakefield, presented by Reed.
The next meeting of the Haleyville Board of Education will be Tuesday, March 17, 7 p.m. at the high school board room.