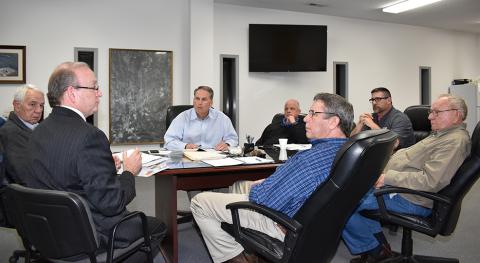 Rick McCabe discusses finances with the Haleyville Water Works and Sewer Board and explains the board is in great shape financially. Clockwise from left are Mayor Ken Sunseri, Bobby Taylor, Blue Russell, Ralph Trallo, Glen Roberts, Lane Bates and McCabe.

HALEYVILLE - A good fiscal year with sound accounting gave the Haleyville Water Works and Sewer Board a satisfying review of their finances by Rick McCabe, CPA, of McCabe and Associates of Fayette. The review was given at the regular monthly meeting Tuesday, Feb. 25.
The finances were in great shape, according to McCabe, allowing the board to adopt a resolution for a clean water state revolving fund revenue bond.

“It was a great year,” McCabe told the board. “You have a good team, a well-run board and the numbers look good.

“Everything we picked to look at we had supporting documentation for,” McCabe said of the review. “This is our best year financially since I’ve been here.”

The big thing to look for is the debt convenance, or the debt coverage ratio, McCabe explained. What that means is the bond agreement says the water board must make a certain amount of money and charge rates which is 125 percent of the debt service.

“We greatly exceeded that,” McCabe said. “This year our coverage was 342 percent. That makes it a whole lot easier to do a bond issue. You’re about to do one tonight. It’s because of where your numbers have been which makes this so much easier. When you don’t meet these coverages, it is hard to do bond issues. We have a legal obligation to make that debt covenant.”

McCabe also mentioned when those who issue bonds see a debt coverage ratio below what they have set, they could technically make the utility board increase their rates and cut expenses.
“We ended the year with about $1.2 million in the bank,” McCabe continued. When you do a bond issue, they like to see money in the bank. $503,751 is our net profit. Last year, we had $460,000.”

Even though it was a good year, McCabe warned it could change quickly.

“You have to maintain your surpluses to do the things you want to do: provide that good, clean water at a good price to all the citizens.”

After the financial presentation, the bond issue was introduced. The resolution number is 2020-01.

“This is for sewer improvements and the clean water state revolving fund,” General Manager Lane Bates said. “This is the project from Newburg Road down to Hwy. 13.”

“One thing to be proud of, is you’re keeping us in the position where we can keep moving and repairing,” Mayor Ken Sunseri said. Keeping infrastructure in shape is “the key to it,” he added.
Board member Glen Roberts made a motion to adopt the resolution with Blue Russell seconding. Paperwork regarding the resolution was then signed and the meeting was adjourned.

The next water board meeting will be Tuesday, March 24, at 7 p.m. at the warehouse building on 20th Street.