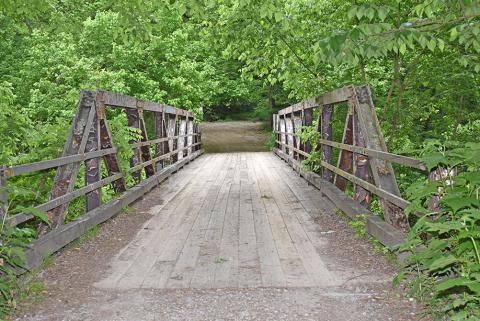 WINSTON COUNTY - Hiking through trails in the woods provides extraordinary views, unusual places not seen elsewhere and brings the kinship between man and nature a little bit closer together. However, hiking can be dangerous, from accidents to becoming lost.
Fortunately, Winston County residents live next to the Sipsey Wilderness and have unfettered access to the “land of 1,000 waterfalls.” Unfortunately, several times every year, people become lost in the wilderness, leading to sometimes days-long rescue efforts by first responders from multiple agencies.
One of the most critical aspects of hiking is having knowledge of where to go and having maps in hand, according to Gary White, of Double Springs.  White, who is an experienced hiker and member of the Sipsey Wilderness Hiking Club, said that a handheld global positioning system is an even better option, especially since cell phone coverage is almost non-existent in the Sipsey.
The Sipsey Wilderness was established in 1975.  It encompasses 24,922 acres and covers portions of Winston and Lawrence counties. There are 12 official trails through the wilderness. Those trails are Borden Creek, Rippey, Randolph, Lookout, Bee Ridge, Thompson Creek, Braziel Creek, Northwest,
Sipsey, Mitchell Ridge, Gum Pond and Bunyan Hill.
U.S. Forest Service officials advise all hikers to never leave the trail, which greatly reduces the chance of becoming lost. However, if one does become lost in the Sipsey Wilderness, Gary White with the Sipsey Wilderness Hiking Club has a a simple and effective thing to remember to help get out.
“Anywhere in that wilderness area, if you follow the way the water runs, you’ll go to the Sipsey River picnic grounds,” White said. “In a day’s time, you can walk from anywhere in that wilderness to the picnic grounds. It comes back to knowing where you’re going.”
White explains why a GPS is better than a cell phone for hiking into the Sipsey.
“In that wilderness, you have GPS capability,” he said. “It leaves a track where we’re going. I have tracks of all the official trails on my GPS receiver. In my opinion, that is better than a phone would be because it is strictly operated from satellite. You’re not depending on a ground-based triangulation system.”

White gave a description of the official trails and their qualities.  Those personal observations are as follows:

“Borden Creek is definitely the easiest one,” White mentioned. “It is very little elevation change.
“In my opinion, it has something which is unique in the Sipsey Wilderness. The trail goes through a rock. You go in a hole, see a 90-degree turn then see daylight. You have to get on your hands and knees to go through it. You can go over the rock, but it’s precarious. It’s exciting for kids, and it might get muddy since it’s close to the creek.
“The bluff line near Borden Creek is shielded by trees most of the way, but it is a pretty trail. With kids, it’s one I’ll recommend every time.

“Rippey is very little elevation change and very little to look at along the trail. It’s just a peaceful walk in the woods,”  White said.

“Randolph has Johnson cemeteries on it. At the end of Randolph Trail at the Sipsey Fork, it makes a steep descent down the hillside to the river. At that point, there is a pretty bluff and a nice waterfall right on the trail. It may be the highest free-falling water in the wilderness,”  White said.

“Lookout has an interesting aspect to it. It was one of two trails built after the wilderness was designated. They were built by Harvey Bell from northern California, for hiking trails. At that time, he had been building trails for more than 25 years. He was proud of the steps he made of stone as they cross a small branch.
“At the south end of the trail, you walk underneath the bluff line. It runs parallel with Borden Creek, but far enough away (that) you can’t see the creek.
“The best thing in my opinion is when you start out on the south end of it, you’re in a sandstone formation. Everything you see is sandstone until about midway of the trail. You cross over a ridge, and all of a sudden, you’re in limestone, and all the rock you see is limestone. It’s a real sharp transition,”  White said.

“Bee Ridge is a pretty trail. The southern part of it is peaceful because it is not heavily traveled. There are several down climbs where there are rock formations you have to navigate. It’s right in the middle of the wilderness area, so it’s not one first-time hikers need to go to first. East Bee Ridge turns and goes to Bee Branch and to the big tree (the largest tree in the state).
“Exercise all precautions, because there are hazardous places,”  White advised. “It would probably be the most hazardous trail in the wilderness area.”

“Thompson Creek would be a good one if you have small kids or inexperienced people. It’s right along Thompson Creek to the point where Thompson and Hubbard (Creek) run together to form Sipsey. There are pretty bluffs on the east side, with the creek being on the west side. There is very little elevation change on this trail,”  White said.

“Braziel Creek is not for small children because the southern half of it is a bit treacherous due to the side slope the trail is on. At the north end of it, there are some pretty bluffs you walk directly under and pretty rock formations. It runs parallel to Braziel Creek, though you don’t see the water from it,”  White noted.

“Northwest was a roadbed before the wilderness was formed. It is relatively easy walking, but it is a long trail. There are bridges across the water crossing places. There are two creeks crossing, and they have bluff lines and pretty views from some of the higher ridges on it,”  White said.

Sipsey River
“The Sipsey River trail is the most heavily used trail, starting where you cross Borden Creek. You’ll go up the east side of the river until you cross Borden to get to the river trail.
“Borden Creek can be a formidable crossing. I’ve crossed it when I had to swim, and I never did touch bottom.
“The trail is one lots of people take their kids on, but I would discourage it because the water crossing can be bad in the winter time and spring,”  White advised.
“It is a pretty trail with lots of bluffs. It goes right by Fall Creek Falls. It has probably the most water of any waterfall in the Sipsey Wilderness coming off it.
“A lot of people think it’s the best way to get to the big tree. The downside of it is the condition is so bad because it’s so close to the water in many places. Trees are constantly being uprooted. It’s hard to maintain it to keep in decent shape. It’s within sight of the river 99 percent of the way,”  White said.

“The Mitchell Ridge trail is the longest trail in the wilderness. You can hear waterfalls.  There are some pretty views in the winter time when leaves are off the trees and beautiful views from the ridges,”  White noted.
“It has moderate elevation gain and loss. It would be a safe trail for kids to be on because it was built by a contractor. It’s built properly. There are steps where you go up the bluff at the south end of the trail. If it’s wet weather, the steps could be slick. At the south end, you’re walking under a bluff line. There are lots of great geological features to look at on it,”  White said.

Gum Pond
“Gum Pond is one of the easiest ones to walk because it was an old road bed. There is very little elevation change to it. The downside is very few views and no significant features to speak of, but for the person wanting to go to the big tree, in my opinion, this is the best trail to start to go to Bee Ridge,”  White advised.

Bunyan Hill
“Bunyan Hill is another old road which is now a trail. It is a horse trail and has serious elevation changes on it, but it is easy walking all the way. The bridge you cross Borden Creek on is a pretty bridge, and the creek is pretty. Then there are a couple of places where you have views in the winter time, but there are no bluffs. Most of it is on the ridge line,”  White said.
Combining trails to make loops is popular among hikers in the wilderness. This prevents having to double back on any one trail and providing a hiking experience from one point to another.
“All of the trails connect to another trail,” White said. “The majority of people looking for an easy walk go to the picnic grounds, go up to the Borden Creek bridge then turn around and go back.”
There are a few markers at trail intersections, according to White, though some are hard to identify.
White gave a list of the top 10 essential items novice and experienced hikers should always take when going into the Sipsey Wilderness:

The Sipsey Wilderness Hiking Club meets the first Tuesday of every month at the Bernice Hilton Walker building at 7 p.m. in Double Springs.  Interested persons are welcome to stop by and learn more about the club.
Wilderness maps and other information are located at the U.S. Forest Service District Ranger office on Highway 33 in Double Springs. Their phone number is (205) 489-5111.