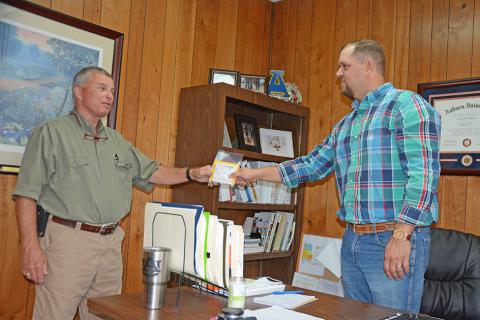 Haleyville resident Mark Finley, left, is the first reported person in Winston County to receive a packet of unsolicited seeds from China. As part of the required process, he is handing over the unopened packet to Winston County Extension Coordinator Zack Brannon at the extension office in Double Springs.

WINSTON COUNTY  -  A Haleyville resident has been the first reported person in Winston County to receive in the mail a pack of unsolicited seeds mislabeled as jewelry from China, but the resident promptly took action to report the situation.
Multiple reports have come to the attention of the Alabama Department of Agriculture and Industries of these unsolicited seeds from China being delivered by the U.S. Postal Service. In fact, residents from several other states including Arizona, Delaware, Kansas, Kentucky, Louisiana, Ohio, Tennessee, Utah, Virginia and Washington State have also reported receiving suspicious packages of seeds, according to the Alabama Farmers Federation.
This practice is known as agricultural smuggling, according to ALFA.
“We urge all residents to be on the lookout for similar packages,” stressed Rick Pate, Alabama Commissioner of Agriculture and Industries. “These seeds could be invasive or harmful to livestock.”
The seeds have been arriving in the state over the past month, noted Winston County Extension Coordinator Zack Brannon.
Across the state, some residents opened the packets and realized the packet did not contain jewelry, but  seeds, neither of which had been ordered.
ALFA stresses that if a person receives this suspicious packet in the mail they should not open it or if they have opened the packet, do not plant the seeds.
The mysterious packet that arrived in the mail  in Winston County listed a return address of ECSEM, Longhua Ginghu Gangzhilong, Youzhengsudi, Shenzhen City Guangdong Province 518131 China.
The packet also listed the value of contents in U.S. dollars at $4.95. However, the description of contents was in Chinese.
Haleyville resident Mark Finley noted he had already received an email warning from the Alabama Farmers Federation and had seen on the news about the unsolicited seeds when he received the packet in the mail on Aug. 7.
“I didn’t know if it was a big envelope when they first started talking about it or what,” Finley said. “So they showed a picture of that actual little-sized envelope.
“As soon as I saw it, I knew what it was because I had seen a picture of it,” Finley stated.
Based on this, Finley contacted Brannon.
“I even had second thoughts about picking it up and handling it,” he said. “Anytime you get something through the mail, a lot of times you tear into it. Look close. I knew (Mark’s wife) Terri and I hadn’t ordered anything that we would be getting a little package in the mail.”
The Alabama Cooperative Extension System is partnering with ADAI to assist in collecting the unsolicited seed packages being sent to state residents.
ADAI field inspectors are currently collecting these seed packets for testing for unknown compounds, noxious weed seed or invasive species, state officials said.
Brannon noted residents in Winston County and the area who receive these suspicious seed packets need to contact the extension office at 205-489-5376 or Brannon’s cell  phone at 256-303-2689.
A time will then be set up for the person who has received the seeds to meet with Brannon, who will take the seeds, place them in a sealed container and make arrangements to send them to ADAI for proper testing.
Residents who receive these seed packets are also urged to fill out two  forms, a Seed Chain of Custody Tracking Form from the state department of agriculture and industries and a Mysterious Seed Packet Follow-Up Inspection Report.
The Chain of Custody form, provided by Brannon, will ask the resident to provide their name, description of the item, condition, treatment of item, date and time. Agriculture officials will also provide the date and time the packet was forwarded to the state lab for testing.
“That allows us to track when the homeowner received it, the homeowner handing the packages over to me and me handing them over to the state inspector, who will take it to the state lab in Montgomery,” Brannon said.
“That way we have a record of what we have and we have not lost anything along the way,” he added. “The biggest thing is we don’t want anyone to open or try to plant these seeds.
“I know people may order something on Amazon, forget they ordered it, get it and want to look at it,” Brannon said.  If such is the case, please set the packet in a Ziploc plastic bag, he added.
The mysterious seed packet follow-up report lists proper protocol, from the time of reception by the resident all the way to the state lab: Do not open, do not plant, place the packet into a clear plastic bag and seal, fill out the special investigation seed report and deliver the packet to the seed lab for testing.
The resident must also fill out the date, their name, address, phone number and answer a few questions concerning the date the packet arrived, if more than one packet was received and if there were any seeds planted. If so, the location where they were planted needs to be provided.
The resident will also be asked to provide on the form the reason why they think they received the seeds, as well if they had ordered anything from an online platform. If so, the website should be provided.
If the resident did order any seeds this year, they are to provide the location from where they ordered the seeds, according to the form.
“I know in some instances across the state they (residents) are (each) getting two or three (packets),” Brannon pointed out.
“We’re thinking that the group in China that is sending these seeds, they may have picked up individuals’ addresses or information through online orders,” he added.
“We really don’t know what these are,” he added. “That is why they are analyzing these seeds. We don’t know if it’s some type of invasive species, that if they plant it, it would be the next privet (hedge) or kudzu.
So far, testing done in other areas of the state have determined the mysterious packets contain seeds, but the exact type of seeds is undetermined, officials said.