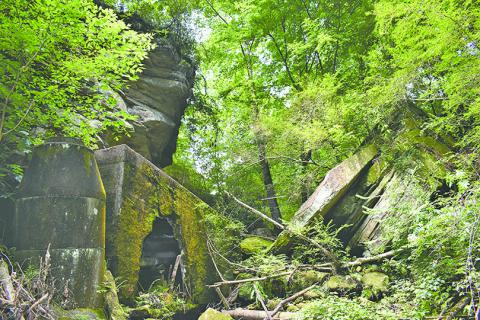 The septic tank at Mineral Springs was one of three installed in the city in 1931.

HALEYVILLE - Many years ago, not far from the railroad in the bustling town of Haleyville and east of Alabama Avenue, there was a three-story hotel, advertised all around as a place for clean and healthy water. During its approximate 30 years, it accommodated many. As Haleyville grew, so did the need for a sewer system to be installed. One of the places selected to have a septic tank was in the woods behind the hotel. Today, the septic tank, no longer in use, will be removed during renovations from the Haleyville Water Works and Sewer Board.
Calvin Cassady, engineer, presented a slide show of photos to the HWWSB,  on Tuesday, June 23. He mentioned the upcoming project at Mineral Springs Apartments on Seventh Avenue South. The old six-inch water main will be replaced with a new six-inch water main, a total of 1,900 linear feet, along with new meter vaults and check valves. Additionally, the gravity sewer and manholes at Mineral Springs Branch, located approximately 200 feet southeast of the apartment complex, will be replaced. The sewer will be re-routed to avoid erosion from the creek. This project is funded through a Community Development Block Grant, the City of Haleyville and the HWWSB. The total amount of the project is $607,362, with $450,000 through the CDBG grant, $56,650 from the city and $100,712 through the water works. Included besides the water and gravity sewer mains will be storm water drainage and paving.
Mayor Ken Sunseri and chairman of the HWWSB signed resolution number 2020-03, an agreement to the matching funds for the Mineral Springs project.
“Downtown Haleyville used to discharge into a big septic tank,” Cassady said. “This was it,” he referred to the area at Mineral Springs Branch. “This was back in the 1950s or 1960s. It was put in a septic tank and then out into the creek. The sewer line is built through the middle of it now. The majority of our sewer in the downtown area goes through this to pump station number three.” The current setup has a manhole undermined, or eroded, being held up by the piping.
“It could get real bad, real quick,” Cassady said. “Through this project, we’re able to get it fixed.” He also mentioned it would be more expensive to fix if it was an emergency situation. However, through the CDBG grant of replacing new water mains, the sewer can also be included within that project, keeping the cost down.
“A broken sewer line in Mineral Springs, where that is at, it’s easily going to cost $200,000 to mobilize and get it fixed,” Cassady explained.
This old septic tank will be destroyed completely according to Cassady. Drew Thrasher, superintendent, added the tank is approximately 20 feet wide, 30 feet long and 12 feet tall.
The septic tank was built by hand with poured concrete, mules most likely one of the ways it was constructed in 1931. Some time later, a hole was carved into the tank to house sewer lines.