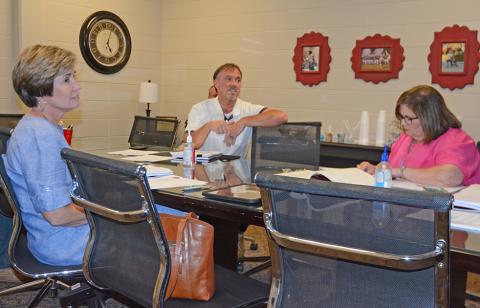 HALEYVILLE   -  Financial supplements for coaches at Haleyville City Schools were brought into question by Haleyville School Board Member Barry Burleson Sept. 14, with Burleson saying that taxpayer dollars are funding at least $140,000 instead of a combination of positions to save money.
During the board’s annual budget hearing, which was held as part of the board’s working session, Chief School Financial Officer Candy Marbutt informed that board that Sparks CPA firm conducted the school system’s annual audit of the financial statements for the fiscal year ending Sept. 30, 2019.
“The financial statement disclosures were found to be consistent and clear,” Marbutt pointed out. “There were no material weaknesses or significant deficiencies identified.”
Marbutt noted that the audit determined no findings related to any financial statements.
Marbutt discussed with board members an overall $19 million budget.  Total revenues are $19,942,768.82, compared to expenditures at $19,821,498.64, for excess revenue of $21,270.15.
In addressing the HCS system budget and a breakdown of revenues and expenditures, Marbutt noted that as per Section 16-13-140 of the Code of Alabama, budget hearings for HCS were held on Aug. 25, and Sept. 14, to discuss the FY21 budget projection.
“Haleyville City Schools will continue to support our teachers, staff and students through implementation of various learning platforms,” Marbutt pointed out.
Marbutt added that STEM labs, standing for Science Technology, Engineering and Mathematics, will be used to collaborate and encourage the engineering design process which is well underway at HCS.
Also, technology and facilities will be enhanced through various funding sources, including state, federal and local funds, Marbutt continued.
“There was no change to the ad valorem millage,” Marbutt said about one of the major funding mechanisms for HCS. “There were no tax referendums to increase or decrease millage amounts.”
The system received $203,000 in three mill taxes, over $436,000  in four-mill tax and $601,000 based on five mills.
The largest portion of the HCS budget, at 68 percent, is allocated for instruction and instructional support, Marbutt noted.
“At Haleyville City Schools, we emphasize the importance of our faculty, staff and students,” Marbutt noted.
Other categories under expenditures included operations/maintenance at nine percent; auxiliary (transportation, maintenance and supplies and child nutrition program) at 9 percent; administrative (board, superintendent, directors, fiscal services, attorney fees, audit fees, travel) at five percent; bond debt service at 4 percent and other services such as extended day teachers, preschool teachers and local school expenditures at five percent, according to the budget presentation.
A cost breakdown of these categories under expenditures showed $13,275,637 for instruction/instructional support; $1,368,772 for operations/maintenance; $1,543,425 for auxiliary;
$989,007 for administrative; $708,548 in debt service and $1,936,110 for other services.
Revenues for HCS were broken down into four sources - $11,663,448 from the state, $4,021,729 from the federal government, $4,140,592 from local sources and $117,000 from other sources.
A review of systemwide totals for the FY2021 budget show 91.34 teachers, three principals, 1.50 assistant principals, three counselors, three librarians, one career tech director and one career tech counselor.
Those allocations from the state department of education are based on average daily membership of students. For every so many students, the school system earns a principal unit, or counselor or librarian, for example.
The flat base is 1,500 students. The standardized formula from the state factors in student average daily membership that determines the number of earned units for principals, assistant principals, counselors, librarians and teachers.
System salaries total $5,576,757, with $2,177,894 in fringe benefits.
Classroom instructional support funding - $62,304; technology - $36,345; library enhancement - $16,378; professional development - $10,384; textbooks - $118,575.
Total Foundation program funding is $10,055,468, less local funds of $591,780 equals total state allocation under the Foundation program at $9,463,688.
Under additional state appropriations, funding for school nurses totals $121,198; technology coordinator, $61,368 and At Risk funding is $47,411.
Total projected enrollment is 1,646 students.

HCS Superintendent Dr. Holly Sutherland informed board members during the work session about the supplement schedule the board was scheduled to approve during a regular board meeting.
The supplement schedule details what those who work with athletics and extracurricular activities receive in extra pay for those duties on top of their regular salaries.
“Last year, we had $143,000 (we paid) in supplements. This year, with those two new (positions) we talked about, we’re at about $147,000,” Sutherland explained.
“If that is something we need to take off the agenda or have more discussion about, let’s do that now and decide where we want to go,” Sutherland pointed out.
Burleson then asked what the head football coach made. It was determined that the head football coach receives $22,000 in supplements on top of his salary.
“We don’t pay his salary,” Sutherland said.  The coach’s salary comes through funding the school system receives from the state.
Board Member Kris Burleson then added, “The only thing we pick up is his supplement.”
“We’re paying an awful lot of money,” Barry responded. “Are we winning more games?”
“We are in the sports that I am asking the coaches for,” Sutherland responded. Kris noted the volleyball team is in the top 10.
“I think the kids are worth it,” Sutherland said. “It’s hard to sit back and say when people get tenure, they stop coaching. Yet, when they are volunteering and giving hours and hours before tenure, and we’re not giving them any type of supplement, I could see where then they say, ‘Well, I really wasn’t appreciated beforehand, but now...I could see where they would stop coaching.  Then we’re in a quandry.
“I think if people dedicate their time to kids and are going every day, every night and every weekend, then we’re talking really about $300 to $400 a month,” Sutherland continued.
“If they are going to give that time, and be that dedicated to kids, I don’t think it’s a lot of money, in my opinion,” she added.
Barry then noted, “I just feel like our sports are down, and we just keep putting more and more money into it.”
“Really, our sports are not down,” Kris responded. “We’re building a program, and you have to invest in that.”
Kris then said sports helps to keep kids in school and helps them make better grades. Sutherland said some of the coaches have volunteered the past several years. Coaches who volunteer do not receive a supplement, school officials said.
“The ones who are on the supplement schedule have volunteered for multiple years,” she said.
“We hired a quarterbacks coach,” Barry then said. “To me, that is the most ridiculous thing we ever did.”
Sutherland reminded Barry that the board had already agreed to those coaching positions and supplements in the past.
“I’ll vote for (the supplements), but I am not for it really,” Barry said. He also reminded the board that they had reduced the number of football coaches overall, but had raised their supplements.
“That is what you requested we did, if you remember correctly,” Sutherland responded.
“I did want you to do less people,” Barry responded. “You know why we want less people?  So we pay less money.”
“I don’t think it’s a significant amount of money for the reward we’ll get from the people feeling like they are appreciated and  valued and all of their time is being somewhat compensated,” Sutherland noted.
“So if we have a losing season, we can cut back on the number we pay?” Barry asked.
Barry noted that $147,000 in supplements is a lot of money for a system to pay for athletic coaches and assistants.
A chart showing supplements for HCS athletics for 2020-21 shows the head football coach receives an additional $6,000 supplement for also being the school system’s athletic director. The assistant AD receives a $3,000 supplement and the middle school  AD receives $1,000.
In the football category, the head football coach receives an additional supplement for that duty at $16,000; the defensive coordinator receives $6,000 and each of the six assistant coaches receives a $4,000 supplement.
At the middle school, the head football coach receives a $4,500 supplement with the middle school defensive coordinator receiving a $4,000 supplement and each of the middle school assistant football coaches receiving $2,500.
The chart also listed supplements for other sports such as volleyball, cross country, basketball, cheerleaders, baseball, softball, track, soccer and golf, but those supplements were not questioned at the meeting, other than as part of the total of all supplements for all coaching positions totaling over $140,000.

Board member Chad Tidwell asked how the buses equipped with Wi-fi were being utilized by virtual students to do their studies.
Tidwell was referring to three buses provided to HCS by Winston County Schools, which equipped the buses with Wi-fi through CARES Act funding.
“I haven’t looked to see exactly what the numbers are,” responded Dr. Bill Bishop, director of administrative services. “We can see the log ins and how many people are logging into the Wi-fi in the parking lot.
“We might be able to isolate it to a specific access point,” Bishop added.
Bishop admitted he had not seen many students accessing Wi-fi from buses for their virtual studies.
Sutherland noted school officials have been doing home visits stressing that if students are purposely not logging in to do their virtual studies, they can be turned over to truancy.
She stressed that school officials needed to check out the buses utilized by HCS students to see the amount of students using the Wi-fi for their lessons.
The three areas where Wi-fi buses are located for HCS students are Ephesus Church in the Pebble area, Beech Grove Church on Beech Grove Road in Haleyville and Grace Baptist Church on Highway 129.
“A lot of the kids I’ve talked to are just going to a common area around their house,” Sutherland said.
She stressed school parking lots also have been equipped with Wi-fi access, as well as some downtown locations.