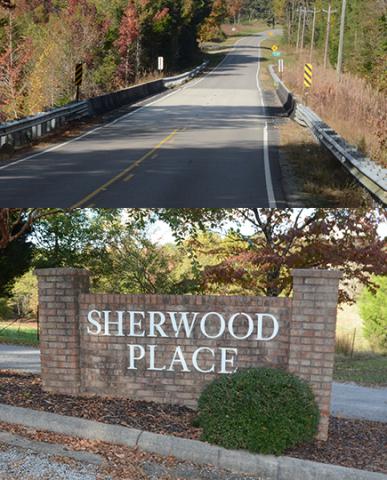 These photos show the areas on Dime Road in which the home invasions occurred. One incident occurred at a residence in Sherwood Place Subdivision, the second 1 1/2 miles away in the Quarter Creek area.

HALEYVILLE - Two home invasion incidents occurred within two hours and 1 1/2 miles of each other on Dime Road, during the early morning hours of Saturday, Oct. 17. The first incident occurred around 2:45 a.m. at a residence in the Sherwood Place subdivision, where a woman heard the back door open and screamed to alert her husband, noted Haleyville Police Chief Kyle Reogas. The husband reportedly went to the back door but didn’t see anyone, but did hear what was described as an ATV or all terrain vehicle crank up, Chief Reogas said. The husband ran to the front of the house and saw a small car leaving, according to Reogas. No other description was given of the vehicle, he said. Later, the husband discovered a few items missing from his truck parked outside the residence, such as $15 in cash and set of vehicle keys, police said. “He later found the keys on the ground by the door of his workshop,” Reogas said. “He also believed the laundry room door was opened, which was near the back door.” Police reports indicate there was no forced entry either to the back door or the laundry room door, both of which had been left unlocked, according to police. Nothing was reportedly missing from inside the residence, according to Reogas. “I’m not sure if the perpetrator ever entered the residence,” he said. However, a perpetrator did enter a residence 1 1/2 miles away in the Quarter Creek area of Dime Road, later that morning, police confirmed. The second home invasion incident was reported at 3:30 a.m., when police were called to a residence at the 6900 block of Dime Road, where the occupant stated he had been robbed, Chief Reogas added. That resident literally had a rude awakening that morning, when he awoke to find a man standing over his bed and reportedly holding a gun. Police officers responded and spoke with the victim about the incident, with the victim informing law enforcement he had been awakened by a man standing over his bed asking “Where’s my gun?” Reogas said. The victim further stated he didn’t know what the suspect was talking about, and that he had lived at the residence only a couple of months, the police chief said. The suspect again implied that the person, who lived in the home he had entered, had stolen a handgun from him previously, said Reogas, adding the suspect then backed out of the house and left on foot. The victim did indicate to law enforcement that he had noticed what he believed to be a handgun held by the suspect. “He never pointed the gun at the victim,” Reogas emphasized. The victim had reportedly asked the suspect his name, with the suspect identifying himself with a name that police believe to be false, according to Reogas. After the suspect had left the residence, the victim noticed that his wallet--containing his driver’s license, health card, $40 in cash and various other cards--was missing, police said. Also, a pickup truck parked outside the residence that belonged to the victim, had reportedly been ransacked but no items reported were missing, police noted. The victim told police that he had fallen asleep without locking either the door to his home or the vehicle outside, Reogas said. The suspect was described as being five feet 10 to five feet 11 inches in height, weighing between 160 to 170 pounds with red hair, not wearing a mask but having on dark jeans or dark pants, a large jacket and gloves, police said. “I think it’s going to the same individual or individuals responsible for both, simply because very seldom do we have a perpetrator who will try to approach or enter an occupied dwelling,” Chief Reogas pointed out. Another incident occurring in that area was a mail box damaged by a blunt object about 1 1/2 miles from where the residence where the home invasion occurred in the Quarter Creek area, police added. However, it has not been determined whether the mailbox vandalism is related to the two home invasion incidents, according to police. “It’s not common that we hear that a perpetrator enters occupied residences,” Reogas added. “However, we caution everyone that you need to lock your doors, lock your cars. “If you have an alarm system, activate your alarm system,” the police chief stressed. Police termed the incident a home invasion where a person enters an occupied home with the intention of committing a crime, police said. “The message I would give is number one, if you have someone suspicious in your neighborhood, call the police,” Chief Reogas pointed out. “Secondly, and most importantly, lock your doors. You need to lock and secure your property,” he further emphasized. This day and age is not as it was 30 years ago, when people went to bed without locking their doors or even leaving their doors and windows open, the police chief said. “This period of time, you can’t do that,” Reogas stressed. “You’ve got to take precautions to prevent things like this from happening. “If you leave your (vehicle) unlocked and the keys in the ignition, it’s real beneficial for a thief,” the chief continued. “Don’t make it easy for them.” The home invasion incidents are currently under investigation, and no arrests had been made in the cases by press time, police indicated. Those who witness a suspicious person or activity, need to contact the Haleyville Police Department at 205-486-5201.