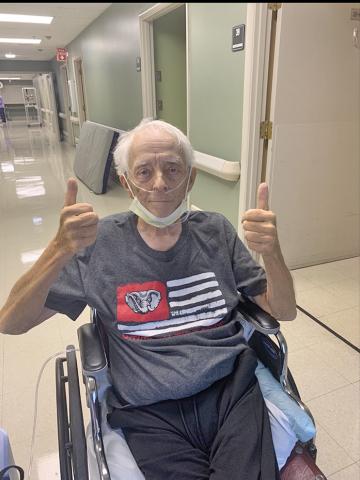 Tommy Gentle, known to many as the “Mayor of Dime Road”, now wears a new title given to him by his family, “COVID survivor”. (Courtesy photo)

HALEYVILLE    - Tommy Gentle has been jokingly referred to for years as the Mayor of Dime Road, voicing strong opinions over various community issues and projects.  He now has a new title, one given to him  by his family: “Our COVID Miracle”.
Tommy’s story, as unsettling as it is, is  really a story of hope, faith, courage and thankfulness--traits that keep him fighting day after day against the virus, as well as renewing the strength of his supportive family in almighty God, in Whom they daily depend.
Tommy has not had COVID for very long when one looks at it by the calendar.  But to his family, it seems like a much longer period--one filled with emotional highs and lows. The second week in September is when Tommy’s bout with COVID-19 began, his wife Linda said.
She recalled that Tommy came in from mowing grass and was feeling bad, claiming at first it was just an allergy.
“I told him, ‘I think you are sick. You need to go to the doctor,’” Linda said. “He said, ‘No, it’s just an allergy. I’ve been out in the grass and weeds.’”
However, Tommy’s sickness grew worse in the next several days. The symptoms were similar to an allergy, but included headache and fatigue.
“Each day, he felt a little bit worse,” Linda said.
By Sept. 19, Tommy’s condition had worsened to the point he wanted to be tested for COVID, Linda said.