Businesses across the area struggling to find employees 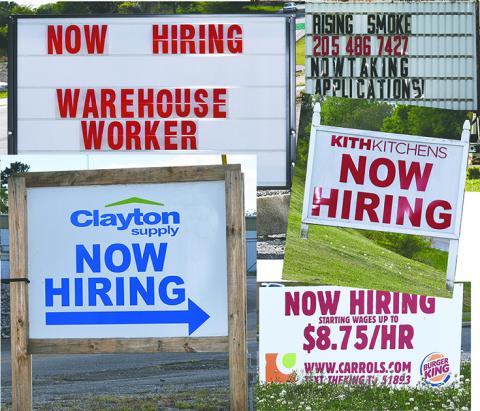 WINSTON COUNTY - The mask enforcement mandate for Alabama has ended. The vaccine is now accessible to anyone over the age of 16. Thankfully, we seem to be nearing the end of the pandemic. Unfortunately, now that the public can enjoy some things they have not been able to for more than a year, there appears to be fewer workers willing to work.
The problem covers many different types of employers. Manufacturing company Exxel Outdoors has recently expanded operations, yet they are understaffed by 38 percent as of the end of March. They need 160 workers, yet only had 99 employees last month. The company went below 100 percent employment in December, 2019, and has not been above the minimum needed since.
“I think we’re fortunate to have the industry now to support the population...if the people will come to work,” Barbara Garrison, operations manager at Exxel, said. “One company told me they needed 100 people. In Double Springs, a company advertised they needed 70. We’re going to have to do something apparently in our area to bring in workers.”
Garrison also mentioned Exxel does what they can to maintain at least a 40-hour week for their employees.
“Now we’re wanting a minimum of 160,” Garrison continued. “We have the facility, but don’t have the employment pool to pull from.”
“We work with career centers, Bevill State and Northwest-Shoals trying to get interested people in this line of work,” Lynda Arnett, materials management, added.
“I don’t know where all the young people are working. I’m not seeing them here,” Garrison said. “We’re not only looking for factory workers, but for maintenance, supervisors, quality...
Some employers believe the stimulus checks given by the federal government during the past and current presidential administrations and  enhanced unemployment benefits are the reasons for not having enough employees. Statistics from one local company do not reflect this however. From April 2020, January 2021 and March 2021, when the stimulus checks were released, two of these months saw a slight increase in employees from the previous month and a small decrease the next month.
A visible sign of the problem was present in Double Springs on Monday, April 1. A long drive-thru line was wrapped around Jack’s, reminiscent of the early days of the pandemic when the dining room was shut down. Several people were turned away by a sign on the door stating the dining area was closed due to a lack of staff.
E-mails and phone calls to Jack’s corporate office made by the Alabamian were not returned as of press time Monday, April 19.

Gateway Foodland in Double Springs has had a lack of applications and a turnover last year more than they ever had.
“In the late fall pushing the winter quarter, we had five people in the market, and in about a six-week period, I lost four of those,” Gateway Manager Allin Bailey said. “I finally got one former market manager who worked in Moulton.”
Bailey mentioned the store has had trouble keeping part-time and full-time employees, including cashiers, stockers and meat and deli market employees.
“I can hire someone in the market, I would hire someone in the deli, I could hire another part-time cashier, day shift and evening shift and possibly another  school kid, on the evening shift,” Bailey continued. “We maintain anywhere from 48 to 54 employees.  I had 49 W-2s I handed out who were not here any more. That’s by far the most I’ve ever had. A normal year is 25 to 30.
“With three stimulus checks, it probably lowers the motivation for some people,”  Bailey believes.
“It changed people’s lives, and I don’t think we’ve overcome that,” Garrison said of the pandemic. “It’s been more painful in our hiring process than it was five years ago.”
“Blue collar jobs pay well. You can get a trade at tech school for a welder, auto mechanics or the medical field. Over at the tech school, they had a kid in school making $15 something an hour, part time,”  Bailey said.
The Alabamian is looking into the Winston economy and will report more findings in an upcoming issue.