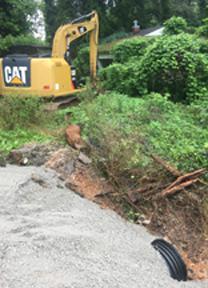 The section of 14th Avenue where the wash out occurred has been repaired, with new culvert installed and gravel filling in the hole that had been dug in the road.

HALEYVILLE - The section of 14th Avenue washed out Thursday afternoon due to heavy rainfall has been repaired and the road reopened, after crews were on the scene placing a new culvert later that night.

Motorists had been urged to avoid the area of 14th Avenue near Meadowlark due to the road being closed.

Heavy rains washed out a section of road two feet in diameter but six feet in depth. The older metal culverts under the roads were washed out and severely damaged, noted Chris Saylor of the street department. Crews were out late Thursday, placing a new plastic and more durable culvert under the road before the next round of storms moved through, officials on the scene said.

Jeremy Wise of the Haleyville Rescue Squad reported late Thursday that repairs had been made and 14th Avenue reopened. Crews had to cut out an entire section of road all the way across in order to place the new culvert, then fill the area with gravel.

Although repairs have been made, motorists are urged to use caution when approaching the area, which is located just around the sharp curve in the Meadowlark area, officials said.

Before repairs could be made Thursday,water, gas and phone lines had to be pinpointed by the respective crews before work could begin, officials said.