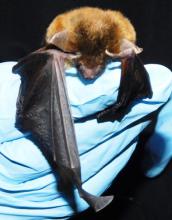 A big brown bat caught during the 2022 Bat Blitz. While bigger than other area cave bats, it is tiny at less than two inches long.

CAMP MCDOWELL - Last week, the bats of the Bankhead National Forest had their moment in the sun—or rather, the moonlight.

Nearly a hundred bat experts and others from at least ten states, plus Norway, converged at Camp McDowell for the 2022 Bat Blitz, an intensive survey of the bat population. Bat Blitzes are organized every year by the Southeastern Bat Diversity Network (SBDN) and a state group, in this case, the Alabama Bat Working Group (ABWG). Outgoing Lakeland Community Hospital CEO Ashley Pool, left, and current Chief Operating Officer and soon-to-be CEO Jennifer Young.
HALEYVILLE - Lakeland Community Hospital will soon experience a change at the helm, but the focus on high quality patient care will remain the same.
WINSTON COUNTY - Amid swirling rumors on social media about a policy regarding cell phone use in Winston County Schools, the board of education took a major step in a special-called meeting to approve amendments to a policy already in place.
DELMAR - Veterans of Foreign Wars Post 4543 will hold a benefit indoor/outdoor flea market and yard sale Saturday, Aug. 13...
PEBBLE - The Pebble Bluegrass Festival will take place Friday, Aug. 12, and Saturday, Aug. 13, at the Pebble Community Center, located on County Road 3423 off of Highway 243 near Haleyville. 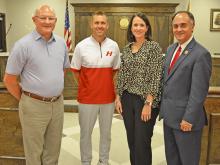 At the Friday, Aug. 5, Haleyville Area Chamber of Commerce meeting, a motivational talk was given to provide a big boost for the start of the new year for Haleyville City Schools. From left, Chamber President Mike Evans; HHS Football Coach and Athletic Director Bo Culver, Superintendent Dr. Holly Sutherland and State Representative Tracy Estes.
HALEYVILLE - Haleyville City Schools is greeting a new school year starting today, Wednesday, Aug. 10, with a renewed sense of enthusiasm by raising the bar even higher.
ARLEY - The Winston County Smith Lake Advocacy Inc., board meeting that was scheduled for Tuesday, Aug. 9, has been rescheduled.
WINFIELD - Northwest Regional Health and UAB Medicine have partnered to open a new UAB surgery clinic to serve patients in Northwest Alabama.

First responders prepare to remove an injured occupant from the hatch of a Kia involved in a two-vehicle crash on Highway 13 in Haleyville Tuesday afternoon.
HALEYVILLE - A two-vehicle crash on Highway 13 on Burnett Hill in Haleyville Tuesday afternoon, August 9, resulted in one injured from each vehicle, a swarm of emergency first responders at the scene and traffic brought to a standstill for over an hour.
This page will have updated scores throughout the football season.
DOUBLE SPRINGS - For several years the volunteers at the Winston County Archives have been collecting news articles about churches in the county, past and present, to compile a Winston County church book, and they are seeking the public’s help to make the book the best it can possible be.

Board of education members, from left, President Chad Tidwell, Superintendent Dr. Holly Sutherland, board members Donna Jones, Boo Haughton and Kris Burleson. Not present was Beth McAlpine.
HALEYVILLE - After a year of being vacant, the place 2 seat of the Haleyville Board of Education was officially filled, when Boo Haughton was sworn into office, during a special-called meeting early Monday morning.

DOUBLE SPRINGS - This Saturday, Aug. 6, Capstone Rural Health Center will give away 250 backpacks plus school supplies, haircut and shoe coupons and more at its 4th annual Back2School drive-through event.
DELMAR - V.F.W. Post 4543 and Auxiliary will meet Monday, Aug. 8, at 6 p.m. at the post home, located off of Highway 13 in Delmar.
WINSTON COUNTY - Gov. Kay Ivey has awarded grants totaling $316,000 to help provide training and resources that ensure victims of domestic violence have access to professional assistance through local law enforcement and nonprofit agencies.

State Representative Tim Wadsworth inspects the makeshift traffic signal that has been installed at Duncan Bridge.
WINSTON COUNTY - A project in the planning stages for years is finally coming to fruition, with work now visible along the iconic Duncan Bridge at the border of Winston and Walker counties.

LYNN - Lynn High School fans are invited out for Meet the Bears Friday, Aug. 5, at 6:30 p.m.
MOULTON - A two-vehicle crash that occurred at approximately 5:30 p.m. Saturday, July 23, has claimed the life of a Haleyville man.

NATURAL BRIDGE - A garbage truck crashed on Highway 5 south near Natural Bridge early Monday morning, July 25.  The driver was reportedly not injured, but trash has been dumped from the truck along the roadway, and authorities are still on the scene.  Motorists should use caution when traveling through this area this morning.

The Alabamian is also on the scene and will have much more in our Wednesday, July 27, edition. 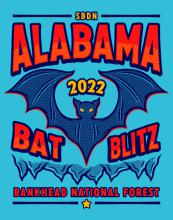 The Alabama Bat Working Group’s Education Committee will hold a Bat Blitz educational event for the public on Monday, August 1, 3-6 p.m., at Randall Commons in Camp McDowell. Attendees will learn more about bats and their importance to the ecosystem, have the chance to see live bats up close and be able to participate in hands-on activities. Children are especially encouraged to attend. There is no entrance fee and no need to register in advance. The public is invited to drop in at any time during the event.