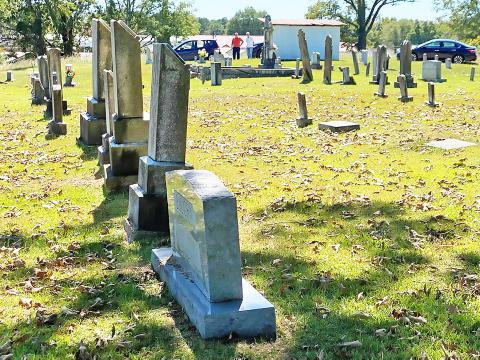 Righting leaning or sinking tombstones, like some of the ones pictured here, is some of the work needed in Lynn Cemetery.

WINSTON COUNTY - More people who own plots or have loved ones buried in Lynn Cemetery, located off Long Street, need to help with the cemetery’s upkeep, according to Terry Fry and Neal Rose, members of the cemetery fund committee.
To raise community awareness of this need, they spoke to the Lynn Town Council about it at the council’s regular monthly meeting on Sept. 19.
Fry began helping long-time volunteer R.B. Waldrop with cemetery maintenance in 2006, and his wife Judy began keeping the cemetery fund’s books in 2012. Since Waldrop passed away in July, the Frys and Rose have taken responsibility for collecting donations, but they are not responsible for the cemetery itself.
“Most people just take it for granted that the cemetery takes care of itself,” Fry said. In reality, everyone who owns a plot is responsible for taking care of it, he noted.
Fry later noted that there is a sign posted in the cemetery that states the responsibilities of plot owners, notably that they should remove any flowers on wire stands or in pots—not those in vases or tomb toppers—30 days after a funeral or decoration, which is the second Sunday in May.
Flowers left on the ground get in the way of mowing and are blown down the hill into the woods by the wind. Even tomb toppers that do not properly fit on stones originally or that become loose over time are blown there. Fry said that he and Rose pick those flowers up, but it’s not their job to do so.
Another problem with any old flowers left on graves is that loose flowers fall off aging arrangements and litter the ground.
Fry speculated about why more action hasn’t been taken in response to the sign, musing that maybe it isn’t big enough to be noticed. For anyone who has not seen it, it is located under an oak tree on the bank just above the cemetery’s upper road, at the spot where a collection box is placed for decoration.
Fry also acknowledged that the sign was not worded as clearly as it could have been. He said that while the sign states, “Donations are used for cemetery maintenance,” that statement was misleading. The only maintenance paid for by donations, aside from removal of a tree felled in a storm once, is mowing.
Rose said that he and Fry have taken it upon themselves to do some other maintenance over the years, such as filling in new graves as they settled, even though it was not their responsibility.
Now, though, he and Rose are getting older and are not able to do as much as they once did, Fry said. For instance, they now need to hire someone else to mow.
The donations he receives cover the cost of mowing six or seven times a year, twice before decoration and then once a month until the weather turns cold.
“I’d like to mow it every week,” Rose said, acknowledging that parts of the cemetery wind up looking “ragged” between mows, “but (we) just can’t (afford to) do it.”
The current amount of donations is not enough to cover other work beyond mowing, such as repairing and straightening tombstones.
That work is the responsibility of plot owners or their loved ones, anyway. However, Fry and Rose said that, if asked, they would help people with straightening stones that are leaning or sinking, a task they know how to perform and for which they can provide the tools. They made it clear they would assist but not do the work entirely on their own.
At the council meeting, Fry said younger people in particular need to get involved with helping to maintain the cemetery.
Rose later said that his mother, Dyliska, who was 96 when she passed away in 2019, had told him that, in the past, since there was not a church with its own cemetery in Lynn, all the churches considered Lynn Cemetery their own and contributed to helping maintain it.
“Over the years, the older people passed, and the younger people just haven't got involved,” he noted.
Fry said at the meeting that he plans to schedule community work days in the cemetery and would like the town to inform residents about these by including notices with their water bills. He would also like the town to make a yearly donation to the cemetery fund. The council is looking into that.
Mayor Earl Gilbert mentioned that student organizations that perform community service might be able to help with maintenance and that a fundraising dinner could be held.
The committee would also like the lower, gravel road in the cemetery to be made a city street and eventually paved. Rose noted that the county has donated slag for that road in the past. Fry said they would like the city to at least keep the sides of that road bush hogged.
Fry and Rose said Waldrop’s long-time dream was for the cemetery fund to be big enough that the mowing could be paid for solely out of the interest the account accrues. That dream never came true in his lifetime. Fry and Rose are hoping it will become a reality in the future.
To contribute to the cemetery fund, make checks payable to the Lynn Cemetery Fund and mail them to either Rose at 1491 County Road 351, Lynn, Ala., 35575, or to Lynn Cemetery Fund c/o Lynn Town Hall, P.O. Box 145, Lynn, Ala., 35575. Donations may also be dropped off at the Town Hall.
“Most people in Lynn have relatives (buried in the cemetery), and if they hadn’t got relatives, they got friends (there),” Fry pointed out, “so hopefully we’ll get (the) attention of some of the people who’s got relatives and friends (and they will) volunteer to help us out.”