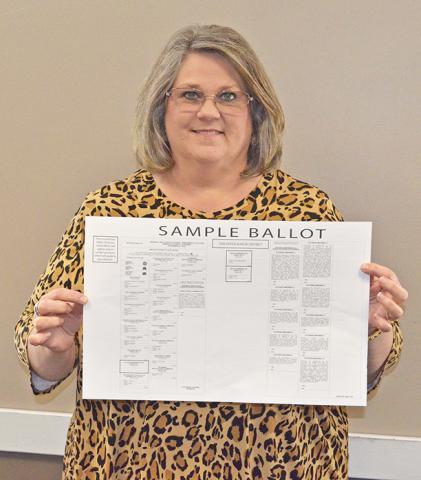 WINSTON COUNTY   -  The time is now for voters to update their registration, if they plan to go to the polls for the general election Tuesday, Nov. 8, or vote absentee.
Offices on the ballot will include governor, U.S. Representative, state attorney general, state senators and representatives and many more.  Polling sites across Winston County will be open election day from 7 a.m. until 7 p.m.
“All elections are important,” Winston County Probate Judge Sheila Moore stressed. “You need to exercise your right to go vote. Every office that gets voted for, affects our county in one aspect or another.”
Absentee voting began Sept. 14.  The last day absentee applications can be returned by mail is Nov. 1, Moore said.
Absentee voting is for persons who will be out of the county on election day, are physically unable to go to the polls, an employee or student who cannot attend due to related obligations outside the county or a member of the military whose service prevents them from attending the polls, election officials said.

An application for an absentee ballot must be returned in person to the  probate judge’s office by Nov. 3, Moore noted.
“They can come in here and vote until then,” Moore said. “They can call here and we can send them a ballot or they can go to the Alabama Secretary of State’s website and print one (a ballot) off.”
Each absentee voting application must be returned with a copy of a valid driver’s license, Moore emphasized.
If more than one person is voting in the same family, each voter must return their absentee application and driver’s license in a separate envelope, election officials stressed.
Absentee ballots returned by hand must be received no later than Nov. 7.   Absentee ballots being mailed must be delivered to the absentee election manager no later than noon on election day, she added.
As of press time, about 35 absentee ballot applications had been received, according to Moore.
Voters who plan on registering in time to vote in the general election need to go by the board of registrar’s office, located in the Winston County Courthouse in Double Springs, election officials said.  They can also go online to register at the Alabama Secretary of State’s website at sos.alabama.gov.
The last day to register to vote for the general election is Monday, Oct. 24, Moore continued.
Those going to the polls on election day must show the poll worker a copy of his or her valid driver’s license or photo identification before being given a ballot, officials stressed.
The general election ballot will contain the offices on one side, with 10 amendments located on the back of the amendment.
When receiving a ballot, voters can select whether they are voting Republican, Democrat or Libertarian if they choose straight party voting.  However, they are not required to choose a party, according to Moore.  Voters also have a choice of voting for candidates in any party, or to do write-ins, Moore said.
Candidates for all local offices on the ballot are running unopposed, but the name has been placed on the ballot in case of write-ins, according to Moore.  Moore reminded that no write-ins will be recognized if they are  fictitious names or persons who are deceased.
“They have to have a certain percentage (of write-ins) before we can even look and count those,” she said.
Local offices on the ballot include Scott Slatton for District Attorney, 25th  Judicial Circuit; Rutger Hyche for Winston County Commission District 1; David Cummings for Winston County Commission District 2 and Caleb Snoddy for Winston County Sheriff.
Although Hyche defeated incumbent Bobby Everett in the primary election--with his name on the ballot only on district 1-- Hyche will be running countywide in the general election, as will Cummings, who ran unopposed in district 2 during the primary, Moore noted.
County commissioners will take their seats Nov. 16, with the new sheriff taking his seat on Jan. 17, election officials said.
Candidates for some state races affecting Winston County will also be unopposed, including Garlan Gudger for State Senate District 4.
The following two offices will be on certain ballots running by their respective district: Tim Wadsworth for State Representative District 14, and Tracy Estes for State Representative District 17.
The race for Alabama governor will be between Republican incumbent Kay Ivey, Democrat Yolanda Rochelle Flowers and Libertarian James “Jimmy” Blake.
The lieutenant governor’s race will be between Republican Will Ainsworth and Libertarian Ruth Page-Nelson;
United States Senator: Republican Katie Britt, Democrat Will Boyd and Libertarian John Sophocleus.
U.S. Representative, 4th Congressional District: Republican incumbent Robert Aderholt, Democrat Rick Neighbors and Libertarian  Johnny C. Cochran;
Attorney General: Republican incumbent Steve Marshall and Democrat Wendell Major;
Associate Justice Supreme Court Place 5: Republican incumbent Greg Cook and Democrat Anita L. Kelly;
For Associate Justice Supreme Court Place 6: Republican incumbent Kelli Wise is running unopposed.
Secretary of State: Republican Wes Allen, Democrat Pamela J. Laffitte and Libertarian  Jason “Matt” Shelby;
State Treasurer: Republican Young Boozer and Libertarian Scott Hammond;
State Auditor: Republican Andrew Sorrell, Libertarian Leigh Lachine;
Commissioner of Agriculture and Industries: Republican incumbent Rick Pate and Libertarian Jason Clark;
Public Service Commission Place 1: Republican incumbent Jeremy H. Oden and Libertarian Ron Bishop;
Public Service Commission Place 2:  Republican incumbent Chip Beeker and Libertarian Laura Lane.