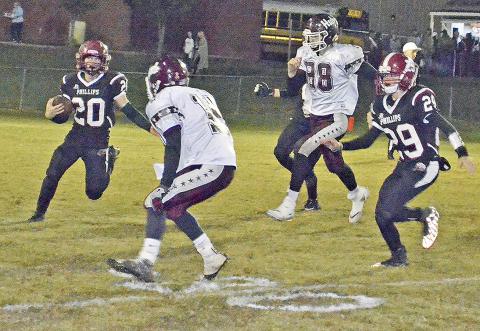 Xavier Hanner on the carry for Phillips.

BEAR CREEK - The 2019 football season came to an end for the Phillips Bears Friday night as the Hubbertville Lions came to town, defeating the home team 48-14.
The Lions of Hubbertville were the first to strike, with Gage Key running it in from 2-yards out to culminate a nine-play drive.  Gabriele Arcidiacono’s PAT was good, and the score was 7-0.  Hubbertville would eat up the rest of the first quarter and go into the second for their next touchdown, with Gage Alexander doing the honors.  The PAT was good once more, and the score was 14-0 with just over 11 minutes left in the half.
Phillips got their first score for the night on the next drive.  Setting up shop at their 20-yard-line after a toucback, Hunter Lanford ran it all the way into the end zone to tighten the score to 14-6.  Setting up for the point after try, the Bears faked it, with quarterback Ken Edwards finding a receiving open in the end zone for the two-point conversion, narrowing Hubbertville’s lead to 14-8.
Unfortunately for the home team, the Lions scored three more times before halftime.  Robert Anthony  ran 44 yards for a touchdown to make it 21-8 after the PAT, then hauled in a pass to widen Hubbertville’s lead to 28-8 after the PAT.  Key was the last to score for Hubbertville before the half on a 5-yard run, and the score was 35-8, Hubbertville at halftime.

The Bears would get their last touchdown for the 2019 season late in the fourth quarter.  Starting at their own 25-yard line, Edwards kept it in the air, hitting Andrew Gilbert for three yards, then found Alex Copeland open, with Copeland getting the first down at the 36-yard line.  Edwards called his own number on the next play and was propelled forward even more thanks to a penalty on Hubbertville, making it first-and-10 at the Lions’ 32-yard line.  The Bears were able to convert on third down after Edwards found Hayden Kelley open, and the Bears were in the red zone at the 20.  Phillips converted on third down again, thanks to Edwards, and it was first and goal at the 4-yard line.  Edwards was in for the touchdown two plays later, with 1:27 left in the game.  An offsides penalty against Hubbertville moved the Bears closer for the two-point try, and the Bears got it to make the final score 48-14.
The Phillips Bears finished the 2019 season with a 2-8 record overall, going 2-4 in 1A, Region 8 play. Hubbertville has advanced to the playoffs and will travel to Spring Garden Friday night for the first round.  This will be the second time the two teams have played one another.  Hubbertville beat Spring Garden 42-18 in 2012.
The Bears had eight seniors on this year’s team:  Ken Edwards, Alex Copeland, Ezra Glauser, Andrew Gilbert, Xavier Hanner, Hunter Lanford, Lucas Atkins and James Grace.