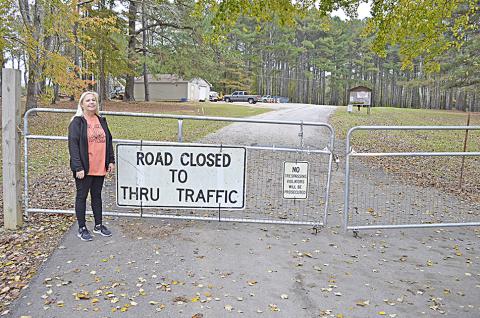 Melissa Taylor, manager of Twin Forks Campgrounds in Bear Creek, shows that the area is currently closed while renovations and improvements are made to prepare the park for a March, 2022, reopening.

BEAR CREEK - Campsite deposits at Twin Forks Campgrounds in Bear Creek have increased over $30,000 from the previous year.
Twin Forks Campgrounds closed to campers Nov. 1, with plans for employees to perform debris removal and some minor cosmetic improvements in preparation for the campgrounds to reopen March 1, Manager Melissa Taylor said.
Last year, the town closed the campgrounds Dec. 1, but Taylor explained the campsites did not bring in enough business or income in November to justify being open the extra month.
For the period of March-October, 2021, Twin Forks Campgrounds brought in total deposits of $191,083.49, compared to $160,862.39 for the same period in 2020, Bear Creek Mayor Rob Taylor told Bear Creek Council members at a recent meeting. This marked an increase of $30,221.10 from 2020, according to Taylor.
“People seem to enjoy that campground now,” Rob stated.
“We have a lot of people who came out of Mississippi who didn’t even know the campground existed. When the (COVID) pandemic hit, they started looking for campgrounds because they shut theirs down in Mississippi,” Rob added. Those campers returned this year, indicating they enjoyed the area, Rob further explained.
Twin Forks Campgrounds contains 82 sites that have water hookups, with 28 additional sites used for primitive camping, Melissa said.
Currently, the town charges $350 per month for a waterfront site, with $300 charged for a non-waterfront site, Melissa said.
Campers pay $25 for a daily site with hookups, with $15 a day paid for primitive site, she added.
Campers were given a month’s notice before the closure to give them ample time to seek other areas or move their equipment out, according to town officials.
While Twin Forks is closed, town employees will do their annual cleaning - removing debris or any fallen trees, as well as painting the bathhouse and installing new towel and soap fixtures with touchless features, town officials said.
Town employees will check power and water hookups, as well as see if there are any water leaks in the campground area, according to Melissa.
These changes will help give the campgrounds a fresh, new look before it reopens to campers in the spring, Melissa said.
Before the park reopens, a drawing will be held in February to allow campers a chance to choose their spots on a first-come, first-serve basis and make arrangements to pay their deposits, Melissa explained. The date for the drawing will be announced later.
Twin Forks Park, located adjacent to the campgrounds, remains open. However, the restrooms at the park area will also be locked until March 1, because the water will be shut off and the restrooms winterized, Melissa added.