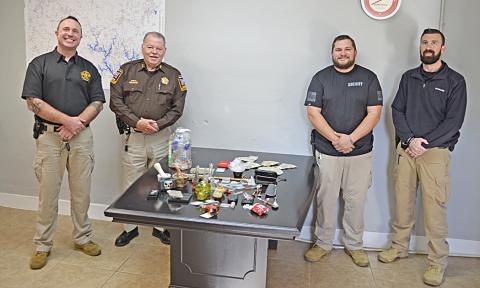 HALEYVILLE    -  Information received from the community of a possible drug house on County Road 20 led the Winston County Sheriff’s Office to execute a warrant and arrest two individuals.
Marcus Austin Warren, of 5619 County Road 20, Haleyville -  where the arrest took place - was charged with  distribution of a controlled substance, failure to pay $25,000 in child support, possession  of a controlled substance, possession of marijuana second degree and possession of drug paraphernalia.
Alan Randal Edwards, 33, of 136 Maple Street, Haleyville, was charged with possession of drug paraphernalia and an identity theft warrant from a separate case, according to Sheriff’s Investigator Jacob Eward.
The sheriff’s office acted upon complaints they had received about possible drug activity on County Road 20 by setting up surveillance, Eward said.  After sheriff’s officials were able to determine the house was being used as a location to sell drugs, they conducted a controlled narcotics buy from the residence, he added.
Eward and Investigator Matt Roberts went to the residence and located Warren, who had an active warrant for failure to pay child support ,as well as a felony distribution warrant with the sheriff’s office, Eward said.
Sheriff’s officials knocked on the door and could hear someone walking around inside the residence, but no one came to the door, investigators said.  After  continuous knocking on the door and announcing themselves as being from the sheriff’s office, Warren opened the door and was advised of the warrants against him, Eward stated.
Warren asked if he could put on his shoes. When asked where they were, he answered the bedroom and allowed investigators to walk with him to the bedroom.
“As we entered the bedroom, I saw a woman lying on the bed and what appeared to be an arm coming out of the closet,” Eward pointed out.
Eward called for Roberts and Deputy Chris Franks to assist. Inside the closet,  they found Edwards, who had an active warrant with the sheriff’s office for identity theft, said Eward. Edwards was taken into custody without incident, he said.
In an open drawer, sheriff’s officials found a bag of marijuana and a plastic bag with white residue, investigators said. On the dresser was a pill grinder with residue, he added.
A search of Edwards’ person turned up a syringe and a clear plastic bag with residue that was in his pocket, which tested positive for methamphetamine in a field test, investigators said.
Eward and Roberts transported Warren and Edwards to the Winston County Jail in Double Springs while Franks stayed behind and secured the scene.
Eward obtained a search warrant for the residence. When the search warrant was executed, Eward, Roberts and Franks found a large assortment of drug paraphernalia, 19.7 grams of meth in plastic bags, .68 grams of heroin and assorted pills, also in plastic tags, according to investigators.
“Heroin is a dangerous drug,” Eward stressed. “Anytime we can get it off the streets, it’s a good win.
“Heroin has caused many people to lose their lives and many people to lose loved ones,” Eward continued.  “The sheriff’s office will continue to fight the drug problem in our county. We appreciate the community for their assistance and support.”
Roberts added the information received from the public has proven valuable in helping to get drugs off the streets.

Drug arrest made
after man applies for pistol permit

On Nov. 23, Eward was in the office of Chief Deputy Caleb Snoddy when the clerk came to them

with a question about an individual applying for a pistol permit, Eward added.
“The individual had a suspended driver’s license because of a failure to appear in Russellville,” he noted.
The individual walked outside of the courthouse to a car parked in front, sheriff’s officials said.
“I could see a female on the driver’s side,” said Eward. “The male walked back up to the sheriff’s office and I went and spoke to the female the car.
“The female rolled down the passenger’s side window and I could smell the distinct odor of marijuana coming from the vehicle,” said Eward, who also saw a marijuana roach in front of the gear shift in the center console of the vehicle.
When asked if any marijuana was located in the vehicle, the female responded she and the male had smoked marijuana while coming to Double Springs from Haleyville, sheriff’s officials said.
Eward advised the woman that he now had probable cause to search the vehicle and again asked her if there was anything illegal in the vehicle, to which she responded there was weed in a bag, pointing to the passenger’s side floorboard.
At this point, the male returned to the vehicle from the courthouse and asked what was going on, Eward continued.
Eward, accompanied by Snoddy, did a search of the vehicle, finding a backpack in the passenger’s side floorboard containing a ziplock bag containing two bags of marijuana, as well as digital scales used for weighing illegal narcotics, investigators said.
Inside the vehicle’s center console was a small plastic bag containing several blue pills which were identified as Oxycodone, according to Eward.
Inside the glove compartment was a loaded .380 pistol for which the male did not have a valid permit, said Eward.
Inside the male’s wallet were $1,621 believed to be proceeds from illegal drug sales, he added.
Arrested at the scene was Juan Carlos Alcaraz, 23, of Haleyville, charged with possession of a controlled substance, possession of drug paraphernalia, possession of marijuana second degree and a pistol permit violation, according to Eward.
Alcaraz reportedly claimed all of the drug-related items, investigators said when asked about the female not being arrested.
The cash and drugs were confiscated. If awarded to the sheriff’s office pending the outcome in court, the confiscated cash will be used to continued fight against narcotics, Eward stated.
“No matter how big or small, we will continue to work narcotics,” he said.