Arrest made in Haleyville business break-in 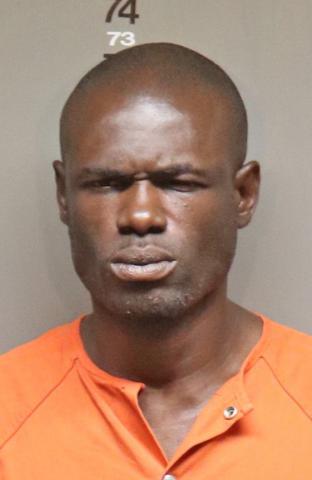 HALEYVILLE - A Haleyville man, who is formerly of Eufaula, was arrested within 24 hours after allegedly breaking into and stealing from a Haleyville business.
Noah Ross Grant, 40, has been charged with burglary third degree, theft of property third degree, as well as criminal mischief third degree, possession of a controlled substance

“In 34 years, I have never been broken into,” White pointed out.  “It makes you feel violated. It made me feel like everything I touched was dirty.

“Basically, he was like a gopher rat in here, the way he disposed of things that he ate.
“If he would have been hungry and come to my back door, I would have gladly given him something to eat,” White said.
White discovered the break-in when she came to work that morning.
“I think the first thing he did was go to the refrigerator,” added White. From there, Grant had removed food leftovers such as pizza, carbonated drinks and chicken nuggets.
“He even warmed the pizza up in the microwave,” White said, “because I checked the microwave later, and it smelled really strong with pizza.
“He made himself at home,” she noted. “I feel like he was here a good portion of the night.”
Grant had pulled out an older cash drawer, but no entry was made to that drawer, White said.
Grant allegedly opened the store’s main cash register, stealing money and an envelope containing a customer’s money, all totaling $350, officials said.
“The cash register up front was locked,” noted White. It is believed Grant used the key to open the drawer to take the cash, then took the key,  she said.
“All my money was gone except the pennies, nickels and dimes,” White stated, adding a roll of stamps was also taken.
The credit card machine was stolen, but was later found and recovered by police behind the Chevron station on Highway 195, officials said.
Grant also went through papers, including customer receipts, said White, adding she found an insulated mug on the floor. The mug still contained ice and Mountain Dew, said White.
“His camouflaged cap was laying on the floor,” White said.
In a storage room, Grant had left papers and empty cans and had gone through a filing cabinet, according to White.
“He had been in the bathroom up front,” she said. “The hand towel was thrown on the floor. Snack items he had gotten out of our cabinet were in the kitchen sink.”
Police also recovered behind the Chevron a box-type item taken from the business. Inside were the credit card machine, a phone charger, four carbonated drinks and two containers of candy taken from the business, according to White.
Besides trash and his hat, Grant also left behind a pair of scissors and a scarf, according to White.
“The scarf was in the sink covered up with all these snacks,” White said. “When police opened it, there was a razor in it and a phone charger, just the cord.”
The hat and scarf left by the suspect at the scene proved to be key items in determining Grant’s identity, according to Collins.
“The hat and scarf had been seen by officers the day before being worn by the defendant on Highway 195 near First Baptist Church,” Collins said.  “That gave us a suspect, and we began looking for Mr. Grant.”
Police began seeking suspects later the day the break-in was discovered, and, by around 9 p.m., officer Adam Flanagin  noticed Grant on 20th Street and 17th Avenue, according to police.
Flanagin spoke to Grant and did a pat down for officer safety, finding a pipe used for smoking methamphetamin, containing residue and a bag containing approximately 1.3  grams of meth, police stated.
Lewis and Collins came to the police department and spoke with Grant, reading him his Miranda rights, with Grant admitting to breaking into the flower shop, according to Collins.
Once Grant confessed to the crime, he was transported without incident to the Winston County Jail in Double Springs on the drug charges and was charged the following morning in connection to the break-in and theft, police stated.  The Winston County Sheriff’s Office also had several warrants on Grant and executed those once he arrived at the Winston County Jail.
“A lot of our problems in Haleyville stem from people who are not from Haleyville,” Collins pointed out.  “They move here and attempt to enjoy the peacefulness of our town.
“A lot of times, the criminals think that because we are a small town, they can come here and get away with things they can’t in other places,” he continued.
Lewis has strongly stated the department will use all available resources toward solving such problems in the city.
“I work long hours,” White said. “It really aggravates me that somebody could come in and take something  that we’ve worked hard for.
“I have no tolerance for laziness, and I have no tolerance for drugs,” White continued.