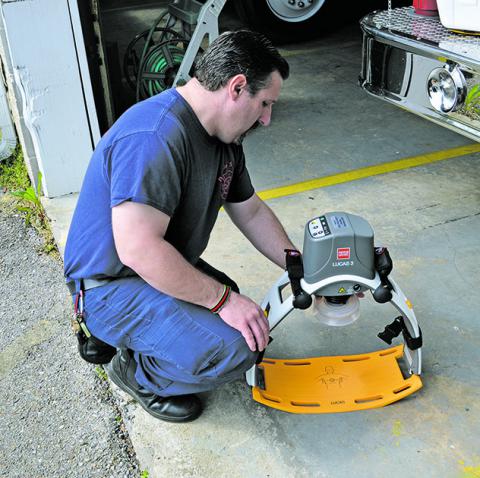 WINSTON COUNTY      - The Winston County Commission is feeling the heat from seven local volunteer fire departments that need a LUCAS chest compression system or automated CPR device, wondering why the commission is not spending funds from their portion of the American Rescue Plan Act.
Only four fire departments in Winston County currently have the LUCAS device - Haleyville, Double Springs, Lynn and Helicon.  That leaves seven departments in the county needing the device, but unable to purchase one with their own resources.  These departments are Delmar, Black Pond, Central, Addison, Arley, Pebble and Ashridge, according to Winston County Emergency Management Director A.J. Brown.
“Our fire departments realize this is a work in progress,” stated Brown, “that all of us are working together to try to do this.
“What they are not aware of is everything it’s taking to actually do it,” Brown added. “They are not aware of what is having to be done behind the scenes to get this done.”
“We have the green light,” District 1 Commissioner Bobby Everett added. “It’s just a matter of if the commission wants to follow the resolution at this point and agree on voting that we accept  the resolution we have to follow.”
The Alabama Association of County Commissions sent the commission a letter  March 30, informing them of the proper procedure to fill out the paperwork for funding on the LUCAS device. The letter was from Kelley Askew Gillikin, director of the ACCA.
Attached to the letter was a resolution which conditionally allocated ARPA (American Rescue Plan Act) monies for the purchase of the automated CPR devices for distribution to volunteer fire departments in the county that currently do not have the device, the letter noted.
“Getting to this result is a little complicated first, because under federal law, the distribution of the proceeds of federal ARPA  must be pursuant to a sub-award to a qualifying entity,” Gillikin informed.

“There are a couple of steps that must be taken prior to making these distributions,” she added. These include a risk assessment of the sub-recipient and the execution of a sub-award agreement with the sub-recipient.
“We will assist the county in walking through these steps,” Gillikin informed.
Another complication, she continued, is that under state law, the county must determine that the distribution of the LUCAS device equipment to the volunteer fire departments would serve a public purpose, and that the county has statutory authority to play a role in addressing this issue.
The commission did receive the green light to start the process by adopting the resolution which conditionally allocates ARPA revenue funds for the project, Gillikin noted.
In the process, the commission would need to provide the maximum amount they would need for the devices and the names of the fire departments which would receive them, according to Gillikin.
Once the resolution is passed, the ACCA would assist the commission in preparing the pre-award packets for the fire departments.
Also, the LUCAS device must be purchased through a sealed bid process, since prices of such devices vary on the market, Gillikin further informed the commission.
Everett noted his father-in-law, who passed away 26 years ago, may have been saved if the LUCAS device was available at that time.  Therefore, Everett said he feels strongly about the need for fire departments to go get the devices.
“The LUCAS device is vital to the community as far as rescuing somebody’s life,” Everett pointed out.
“To help the fire departments, I have been working on a resolution through the ACCA.  We have that resolution, and we as a commission are working through this thing together to try to come up with an opportunity to put it on the agenda for a vote,” Everett added.
“I am for helping the fire departments, if it’s legal and we can do it,” he said.
“It’s up to the commission to take steps forward whether they want to put it on the table or on the agenda and go through with this sub-award resolution,” Everett related.
“We’ve got strict guidelines to follow, as we do on other things that are grant related,” Everett pointed out.
According to the U.S. Department of Treasury, Winston County is to receive a total $4,589,656 in American Rescue Act monies over a two-year period.   Half of the funds -   $2,294,828 -were given to the county in 2021, with the remaining half to be given to the commission this year, Winston County Commission Chairman Roger Hayes explained.
“The money is there,” Hayes confirmed. “But the paperwork has to be done right before we approve it.

“We can ask for it, but that doesn’t mean we’ll get it,” Hayes added, adding the ACCA would have to make a determination on it.
Commissioner for District 2 David Cummings strongly denied ongoing rumors that he was opposed to the LUCAS device.
“I want to clarify some rumors that are going around that I am against the LUCAS device,” Cummings began. “That is 100 percent false.
Cummings stated that in October, he was the one who asked the first questions regarding getting LUCAS devices.  Cummings recalled that at that time, he went to fire departments, explaining there were monies from the American Rescue Plan Act that would be applied toward the devices.
However, the question of costs remains a big concern with the commission moving forward, Cummings pointed out.
“The prices we are getting are from $70,000 to $120,000. We can’t get anybody to give us the prices,” Cummings said. He was referring to the total amount for all LUCAS devices needed.
The association of county commissions and the federal government have changed the outline of how the commission can spend the money at least three times, Cummings said.
“I understand the commission as a whole is wanting these devices,” he stressed.
As a volunteer firefighter for 27 years, Cummings knows and understands the value of raising funds, especially in fire departments not supported by a municipality, as well as the value of the LUCAS device, he explained.
“This is a huge thing for fire departments,” said Cummings. “I support it 100 percent.  I am doing everything in my power to get the LUCAS devices. We just have to go by it the proper way to get this done like it needs to be done.
“When you use the federal government, you have to play by federal government rules,” Cummings continued. “There is a lot of red tape we’re having to do to get this money.

“The commission can’t come up with $120,000, if that is what it takes to buy these,” said Cummings. “We have to make sure our paperwork is properly done and everything in place to get these devices for our volunteer fire departments.”
Cummings stressed paperwork from the county commission association must be completed. The commission must then pass a resolution, he added.
“We have to figure out if this is something we are going to buy and take to the departments or whether we buy them, the county owns them and the fire departments use them.
“There are still a lot of questions that need to be answered,” Cummings stressed. “This commissioner is not going to misuse funds. I promise I will not misuse funds, and it will be used properly.
“That is where I stand on this,” Cummings concluded.  “You can ask any fire department in my district. I go above and beyond anything I can do to help them.
Hayes echoed that he had been working with Cummings on the LUCAS device issue.
“What we don’t know is how to get the paperwork done,” Hayes stated. “That’s the reason I didn’t sign off on it and do the stuff in the meeting because I didn’t want to get my cart before my horse.
“I am the one that has to sign,” Hayes pointed out. “The responsibility  falls back on me if there is a mishap, and I want it done right.”
Hayes confirmed with Cummings that no one was against the LUCAS device.
“We’ve got to be able to do it, and get the paperwork right,”  Hayes said.  He said that the cost for each device ranges from $9,700 to $18,000.
“That’s each, and there are seven (fire) departments,” said Hayes.
That would bring a total needed for LUCAS devices for all seven fire departments to somewhere between $80,000 to over $100,000, depending on the cost per device, county officials said.
“None of us has seen a price,” Hayes pointed out, adding that Brown was working to obtain pricing.