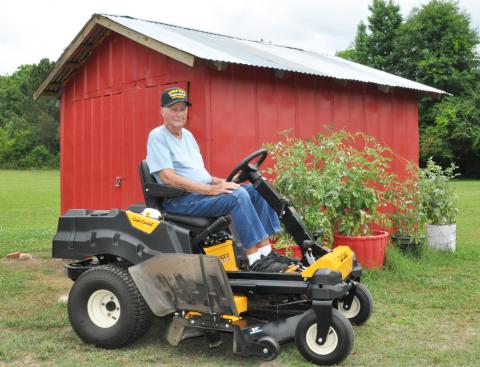 HALEYVILLE - Melvin Miller of Haleyville celebrated his 95th birthday last week. An Army veteran and longtime railroad man, he was born on June 8, 1927, to Chris and Ida Miller and grew up on their farm on Beech Grove Road, where the family grew corn and cotton.

“From day one, when I got big enough to work in the fields, till I turned 18, I worked on a farm,” Melvin said. He started helping with the plowing when he was seven or eight. “I never will forget the time—what really popped into my mind—we was plowing new ground,” he began. “We (he and a sibling) tied the mules up. We had a fishing pole with us, and Daddy didn’t know it. We just tied the mules up in the shade, and we took off and went fishing.”

Miller continued, “We heard something behind us. There was Daddy a’standing there. We didn’t do that no more.” He laughed. “We got in trouble right there real quick.”

“We’d do something wrong, Mama would say, ‘All right, wait till your Daddy gets here. We’ll tell him,’” Melvin recalled. “And she don’t forget them things either!” He laughed. “He didn’t beat us or nothing like that at all. A good ole country whupping (is) what it was. (After that,) it’s something you won’t do twice in a row, I’ll tell you.”

Melvin grew up with eight brothers and sisters: Cecil, Joe, Geraldine and Drezel (whose nickname is Top) were the elder children, and Davona, David, Pete and Martha were younger than Melvin.

On growing up in a large family, Melvin said, “(We) had a pretty good time. We didn’t fight, nothing like that, you know—cause we known better than to.”

When Melvin was five or six, the family moved to Posey Mill, and he attended the Posey Mill School. “I’d walk a little over a mile at one time (to school),” Melvin said. “All the plumbing back in them days—outside toilets, you know. Had a boys’ toilet and a girls’ toilet. Wasn’t no plumbing on the inside at all. We had water in the front yard where you pump it.”

The children all brought their lunch from home. “Sometimes we’d take cornbread, maybe a biscuit or two. Back in them days, there wasn’t no expensive things to take to school. You’d have to (take what) Mama fixed at home for us.”

Asked what he did for fun in those days, Melvin replied, “When we wasn’t going to school? Picking cotton. Hoeing cotton. That was our springtime. When cotton gets ready to pick, they’d turn the school out two weeks. We all picked cotton.”

At home, in the evenings, with no electricity, the family lit kerosene lamps and listened to the radio. “Daddy had bought a Sears and Roebuck battery radio, and one of my favorite programs was Lum and Abner,” Melvin said. “They was like a comedian show. And their byword, when the telephone rang, they’d always say, ‘Jot ‘Em Down Store.’” Lum and Abner, a network radio comedy show about the co-owners of the Jot ‘Em Down Store, aired from 1931 to 1954.

Melvin also recalled going to the movies with his younger brothers every other Saturday. “We walked ten miles to Haleyville to see a movie,” he said. “It took a pretty good while. Sometimes a log truck would come by and pick us up, and sometimes they’d just keep a’going (and) we’d walk.” He laughed. “Or we’d buy a comic book, and if I’d saved them books, they’d be worth a fortune.” Of the Roy Rogers, Gene Autry and Flash Gordon comics he favored, he said the Roy Rogers comics were his favorite.

He and his brothers and their friends also played in the woods and swam in Posey Mill Pond. One swimming expedition in particular stands out in his memory. “One of our buddies, just two years older than me, every time we would get out somewhere, the older boys would tell him to whup me and my younger brother.” The older boy, Lloyd Kemp, would do as the other older boys told him, if Melvin and his brother couldn’t escape him. That all changed one day as they were returning home after having gone swimming.

“I seen him walking down the hill. I said, ‘Top, we got a problem now. Here they come,’ and we could hear (them) telling that boy to whup us. We started walking off. I said, ‘Top, I’m tired of walking away from him.’ So, we ganged up, me and him did. Boy, we give him a whupping now. We had him down there on the ground, hollering to pull us off him.” He laughed at the memory.

“He never bothered us no more,” Melvin said. “He never did bother us no more. We’d had enough, you know. We never did think we could whup him, you know. He’s a lot bigger than we was. He’d holler, tell them, ‘Pull ‘em off of me! They’re killing me!’ He’d grab us by the feet, but we had him locked under the (arms). He couldn’t get loose. We didn’t hurt him or nothing like that. Just surprised him, you know, that we would fight. That’s the first time I’ve ever done it—(and) the last time.”

Melvin turned 18 in June of 1945 and registered for the draft. “(By) October 31, I was in Fort Knox, Ky.,” he said. World War II officially ended on September 2, 1945, but the U.S. and its allies occupied (among other countries) a divided Germany until 1949, Japan until 1952 and Austria until 1955. “They was needing us,” Melvin said of the speed with which he was drafted. In fact, he even had to postpone his senior year of high school because of his service.

His two eldest brothers also served, Cecil in Germany, where he was wounded, and Joe in the Philippines. Their father had been in the infantry in World War I.

After four or five months of training at Fort Knox, Melvin was stationed at Kisarazu Air Base, a Japanese airfield about 20 miles outside of Tokyo that was occupied by Allied forces at the time. Melvin serviced P-51 fighter planes. He once caught his finger between two heavy doors on one of the planes and hurt it badly enough to go to a hospital in Tokyo, traveling there on a Japanese passenger train. It was the one time he saw the city. “There wasn’t much left in Tokyo,” he said, adding that the Allied forces had torn it “all to pieces” in the Doolittle Raid, which was the first Allied air strike on Japan in 1942.

Finishing his service with the rank of private first class, Melvin came home from Japan in January of 1947 and was able to complete his last year of high school in Bear Creek thanks to the the GI Bill, which he said paid veterans a weekly stipend of $25 while they completed their educations. He married his first wife, Tommie Sue Steel Miller, that same year. They would have two sons, Melvin Oneal and Steven Allen. He also got his first car, a Plymouth Coup.

After finishing high school, Melvin worked for the city of Haleyville and then for the county and later for the Haleyville Textile Mill. In 1950, he went to work for Illinois Central Gulf Railroad as a flagman and brakeman on trains that ran north to Jackson, Tenn., or south to Birmingham.

He recalled one of his first experiences of television from around this time period. “A neighbor of mine, name of Horace Glenn, he’s the only one that had a television there (on Macedonia Road where Melvin lived). We’d all meet down there on the weekend, on Saturday night. He’d set the television in the window. We’d be on the outside looking at it,” Melvin said. “There wasn’t (but) about two or three stations, (the) only ones you could watch back then,” he added. “Art Linkletter, he was on it.”

Melvin recalled, “We had a good time there, sitting out there.”

Melvin worked for the railroad until diesel engines replaced steam engines, putting him out of a job. “The diesels come in ’56, I believe. You couldn’t find a job nowhere then. We had to move to Illinois. Chicago.”

Melvin explained why the diesel engines meant fewer flag- and brakemen were needed “A steam engine could only pull 35, 40 cars, and a diesel engine, it’ll pull over a hundred cars. Didn’t need us all,” he said.

His family lived in Chicago from 1957 until 1962 or 1963, during which time Melvin had a manufacturing job at Avon Cosmetics, “where they make that good-smelling stuff,” he said. “Then (at) that time, the railroad was running shorthanded. They called me to come back to work for them.”

Melvin and his family returned to Haleyville where he resumed working for the railroad, from which he retired in 1986. After that, he and his son Steven started a bunk-bed making business. They sold their beds in stores all over the southeast—in Florida, Louisiana, Mississippi, Tennessee and Georgia as well as in Alabama—until a fire destroyed their workshop in 1990.

By then, Melvin and Tommie Sue had divorced. Pete met his second wife, Mary Ellen Colon Acox, through his brother Pete. “Pete, my brother, was dating her friend,” he said. “They got to talking, and she said she’d like to meet me, so we got together and got married.” Melvin moved to Jasper, where Mary Ellen lived.

Melvin said, “We done a lot of traveling. She had a sister lived in Panama City. We’d go down there and see her.” They also once spent a week with Mary Ellen’s cousin in Peoria, Illinois. “And I like to gamble,” he added, laughing. “We’d go to Tunica a whole lots. We didn’t never get hooked on it because we’d know what our limit was when we left home What we can spend, what we can’t,” Melvin said. “Lot of people don’t consider that.”

He and Mary Ellen had an RV and liked to go camping. “We’d go over on the Mississippi River. There’s five or six campgrounds up and down across there.” They’d spend a week at a different campground every month.

After Mary Ellen passed away, Melvin returned to Haleyville. In 2012, he was diagnosed with malignant melanoma, which he said slowed him down some, but it is now in remission.

He takes pride in his 1.5-acre lawn, which he mows himself. Last year, he told his son Steven and daughter-in-law Robin that he had a very specific birthday gift in mind. “I said there’s one thing I wanted before I left this world. They said ‘What?’ ‘I want a Cub Cadet tractor. I want a 54-inch cut, and I want a zero-turn on the steering, and I want a steering wheel on it.’ On the others, you’ve got them levers, you know,” he pointed out, demonstrating the action of driving with widely spaced lap-bar style steering. “You don’t see many out there with steering wheels.”

He’d previously had three smaller Cub Cadets that had steering wheels, but it wasn’t easy to find a larger one that did. Robin spent three or four days searching online before she found one in stock at a Moulton store. They went to see it, and when Melvin mentioned that he’d just celebrated his 94th birthday, the salesman threw in free servicing for a year. The store even sent someone to Haleyville to pick up the tractor when it needed work.

“I think his favorite thing now to do is get out and cut the grass,” Robin said.

This year, Melvin is looking forward to a card from his niece Edith (“Every holiday I get a card from her,” he said.), a birthday dinner prepared by Robin and Steven and a weekend visit from their daughter, April Smith, her husband Chad Smith and Melvin’s two youngest great grandchildren, Brooklyn and Greyson Smith.