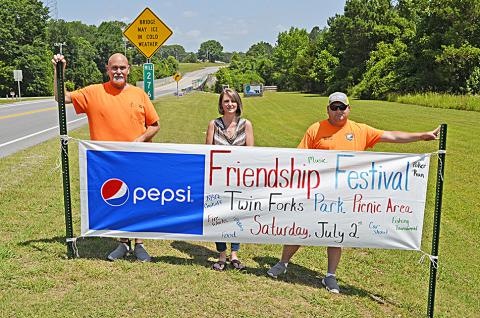 The town of Bear Creek is excited about bringing back the Friendship Festival after a 20 year hiatus. Shown with one of the banners advertising the upcoming festival are, from left, Mayor Rob Taylor, Town Clerk Kay Wiginton and Jeremy Sibley, organizer of the festival’s live entertainment.

BEAR CREEK      -  Families looking for something to do this Independence Day weekend should look no further than Bear Creek’s Friendship Festival, which has been brought back after more than 20 years.
Mayor Rob Taylor and town officials are proudly announcing this year’s Friendship Festival planned for Saturday, July 2, at Twin Forks, to be unlike any other.  From the shorelines of Bear Creek to the children’s playground, ball fields and main stage, the entire park will be utilized for a variety of activities planned throughout the day, starting at 11 a.m.
These events include arts and crafts and food vendors, live entertainment from the main stage, a cruise-in car show, a cornhole tournament, a professionally regulated fishing tournament, a motorcycle poker run, a kids’ zone and a barbecue cookoff, organizers said.
The grand finale will be a 20 -30 minute fireworks show at 9 p.m. from the islands of Bear Creek at Twin Forks Park, Taylor said.
“This is the first Friendship Festival we have had in probably 25 years,” Taylor pointed out. “It was a yearly thing for probably 20 plus years.  It’s like a lot of other things, it just fell by the wayside.”
When Taylor was campaigning for mayor, he was asked when a public festival would return, he said.
“So we started (planning) six, eight months ago,” Taylor continued. “Over a period of time, everything has come around where we can make it a reality this year.
“This year should be a huge festival, but  next year, we’re hoping to have issues with not having enough room,”  Taylor added.
Vendors will start setting up at 6 a.m., Saturday, July 2, with all arts and crafts vendors to be located at the walking trail at the park. Food vendors will be placed at the pavilion area near the main stage, Taylor said.  The cost for all vendors is $25 for a 12x12 spot, according to organizers.
The deadline for food vendors to sign up with organizer Eugenia Cottongin is June 25, Cottongin indicated. the deadline for all other vendors will be June 30, she added. Vendors needing to register or more information can contact Cottongin at (256) 476-5939.
The festival kicks off at 11 a.m. with a welcome by Taylor at the main stage, followed by prayer and the playing of the national anthem on guitar by 12-year-old Henderson Brees Smith, the mayor said.  Smith will be followed by Mike Jones followed by Southern Image and the group Whosoever.
At this point, there will be an intermission in order to report the results of the poker run as well as do the weigh-in for the fishing tournament.
The Friendship Festival Bass Tournament will begin that day at 6 a.m., with anglers encouraged to weigh-in results at the main stage at 2 p.m.
Golf carts will pick up anglers from the boat launch area and will transport them to the main stage and back, organizers said. Boats can also be docked at the shoreline area behind the stage, they added.
the cost to participate in the tournament is $60 per boat, with $10 of that fee going to lunker,  70 percent paid back toward prizes and 30 percent being applied toward festival expenses.
The rules for the fishing tournament are two people per boat, a five fish limit, large mouth and spotted bass at least 12 inches only.  No snagging, live bait or dead fish allowed.
Anyone declared late will be disqualified, noted organizer Jeremy Sibley, who is also organizing the live entertainment.
After the intermission, The Tommy Crowder Band will resume the live entertainment from the main stage area. They will be followed by Tri-Cities Saviors, of which Sibley is a member.
After another intermission, the headline act Fly By Radio from Birmingham will take the stage from 7-9 p.m., organizers stressed.
“I am a musician myself,” said Sibley. “So I wanted something that involves the local musician.  There is a lot of talent around here that doesn’t get any exposure, without having to go an hour out of the way.”
Since people enjoy a variety of music, Sibley chose a country band, rock band, gospel music, as well as a headline act that plays different genres of music, he said.
“No matter what kind of music you listen to, your kind is going to be there unless it’s opera or rap,” Sibley noted.

Registration for the barbecue cookoff is currently underway, with forms available at Bear Creek Town Hall, as well as on Facebook at Friendship Festival, noted town council member and event organizer Chris Hyde.  The deadline to submit applications is today, Wednesday, June 22, so organizers can make arrangements for space for the cookers.
The cooks’ meeting will be held at 6 p.m. Friday, July 1, to give cookers time to set up their grills complete with power and water access, at the concession stand area of the ball fields and to have their meats inspected, Hyde said.
The cookoff is not sanctioned, but a back yard type event, he noted.
The entry fee is $75 per contestant, with 100 percent paid back in prizes, according to Hyde.
The cookoff will be held during the festival, with turn-in times being 11 a.m. for chicken, 11:30 a.m. for ribs and 12 p.m. for pulled pork, Hyde explained.   Awards will be given for first, second and third place. All will receive plaques, with first and second place receiving cash prizes, he said.
An overall grand champion will also be selected, according to Hyde.
“We’re trying to get something started, and we hope it grows every year,” Hyde said.

Registration for the Corn Hole Tournament will be at 11 a.m. with bags flying at 12 p.m., noted organizer and Bear Creek Police Chief Douglas Hallman.  Entry cost will be $15 per person, with first, second and third place prizes awarded, Hallman said.
Five dollars from every entry fee will go back to the town, with $10 of the fee applied toward prizes, according to Hallman.
“Cornhole is a big thing right now,” Hallman stated. “It will probably bring a bunch of people out that might not come if the (tournament) wasn’t going on. The more people who come, the more word of mouth gets out about next year.”

The cruise-in of classic cars will be throughout the day at ball field 1. No entry fee will be required in this laid-back format.
The Bear Creek Civitan Club is sponsoring the poker run.  Registration will begin at 9 a.m., at $20 per hand.  Kickstands will go up at 10 a.m., with the bikes returning at 1 p.m. and winners announced at 1:30 p.m.
A variety of inflatables will be available for children at the kids zone area as well, organizers said.

Bear Creek Friendship Festival T-shirts are on sale for $10 for sizes small to extra large and $12 for 2X and 3X, organizers said.  They are currently available at Bear Creek Town Hall by calling Wiginton at (205) 486-4707.