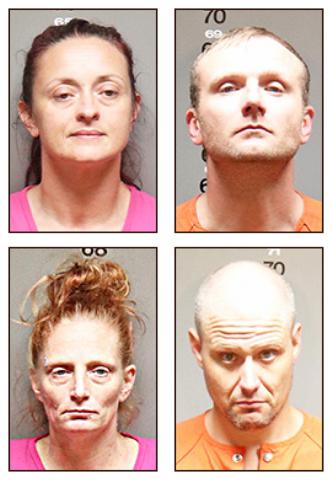 HALEYVILLE      -   One of the largest multi-room drug busts at the Imperial Inn on Highway 13 in Haleyville has resulted in multiple packages of marijuana, meth and pills being confiscated and five persons, including an office employee, being arrested.
This incident comes amid a pending lawsuit filed by the City of Haleyville against the motel, citing the property has become a nuisance due to its condition and frequent drug-related activity and should be closed.
“It’s the biggest multiple-room bust we’ve made,” stated Police Chief Rodney Lewis. “It was made off a search warrant after we obtained information the lady was selling out of the motel and working in the office.”
Those arrested include Jennifer Dianne Lawler, 45, of Phil Campbell, an employee at the motel office, charged with two counts pf possession of a controlled substance, one count pf possession of marijuana first degree and possession of drug paraphernalia;
Waylon Harvey Williams, 41, of the Imperial Inn, Haleyville, charged with possession of a controlled substance and possession of drug paraphernalia;
Lori Faye Lay, 42, and Joseph Heath Terry, 39, both of the Imperial Inn, Haleyville, each charged with possession of marijuana first degree, possession of a controlled substance and possession of drug paraphernalia and Amy Michelle Sutherland, 48, of Russellville, charged with possession of drug paraphernalia and illegal possession of prescription drugs--all according to Haleyville Police Investigator Lt. Eddie Collins.
On June 21, Haleyville Police received information that led to a search warrant being obtained for the Imperial Inn, which was executed at 4:30 p.m., Collins stated.
Lawler, who worked in the motel office, was the target in the investigation, police said.
Once arriving on scene, Haleyville Police made contact with Lawler, and she escorted officers to her room, which was 119, where police found Williams, Collins said.
Inside the room, police found a small amount of marijuana, two syringes loaded with methamphetamine and six syringes inside a guitar case, three of which were loaded with meth and ready to use, police indicated.
Also found in Room 119 were bags, paraphernalia and other items used to package and distribute narcotics, according to police.
Officers then went with Lawler back to the motel office, where they found inside her purse several packages of marijuana, scales, 25 Klonopin pills and a loaded nine-millimeter pistol, Collins pointed out.
Also found in her purse were $203 in cash, which was believed by police to be proceeds from illegal drug sales, Collins said.
While officers were there, the odor of what was believed to be marijuana was coming from Room 105, leading them to find Terry and Lay, as well as multiple bags of marijuana packaged for resale,  paraphernalia and  two syringes loaded with fentanyl, which is becoming a commonly-used, but deadly drug, law enforcement said.
Police then smelled the strong odor of what was believed to be marijuana coming from Room 126, leading them to find Sutherland, who had possession of drug paraphernalia and Suboxone strips, Collins said.
“She had been using narcotics in the room,” he stated.
Collins added this incident was just one in an ongoing investigation about drug use at and distribution from the Imperial Inn.
“It is mainly a distribution point  for illegal drug activity and other illegal activities. It’s a problem we’re having to deal with almost daily,” Collins pointed out.
All of those arrested on felonies were transported to the Winston County Jail in Double Springs. Sutherland had misdemeanor warrants and was arrested, but made bond and was released, police said.

* When someone is accused of a crime, it is merely an accusation until or unless the person is proven guilty in a court of law.