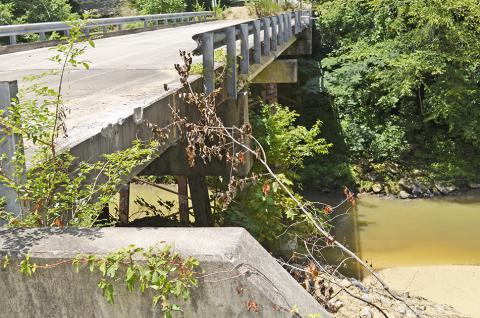 Replacing a section of railing on the County Road 4 bridge near Double Springs is some of the last work that must be done before the bridge reopens later this month.

DOUBLE SPRINGS       -  After an extended closure, the bridge on County Road 4 will be reopened later this month, after extensive repairs to the pilings or foundational supports underneath the bridge that were becoming worn and had posed safety concerns.
The County Road 4 bridge, located off Highway 195 south of the town of Double Springs, spans Clear Creek. Through the years, however, the bridge had posed concerns, with county crews  discovering that three of the four bridge pilings or supports were showing signs of deterioration during a routine inspection, noted Winston County Road Engineer James Glasgow.
This deterioration included rust, which was in the splash zone of the water level underneath the bridge, according to Glasgow.
“It would be erosion of the metal,” he said. “You have sand and stuff beating up against the metal, and sticks and trees. Over the years, it had deteriorated.”
Since the bridge spans Clear Creek, much water flows through the area which can also bring debris, road officials noted.
Winston County road crews worked closely with the Alabama Department of Transportation, in order to develop the proper plan in restoring the foundations of the bridge, Glasgow explained.
The bridge qualified for Federal Aid Exchange Funds, with around $20,000 being used on the County Road 4 bridge, he said.
Winston County each year receives $400,000 in Federal Aid Exchange monies which are alternated every other year from district 1 to district 2 projects, county officials said.
The County Road 4 bridge project was carried over with funds
funds from district 1 in the previous year, Glasgow explained. This year, district 2 will receive Federal Aid Exchange funds, officials said.
“I am pleased to announce that we have the repair complete, except for we’re waiting on some test results,” said Glasgow. “We are going to try to do some painting.”
The test results, to which Glasgow was referring, pertain to the concrete.
“We sample the concrete  to make sure we have good concrete,” Glasgow explained. “It’s a standard test that we do whenever we pour concrete.”
The actual concrete testing is done at a lab, where the concrete is determined to have the right consistency to be used as a base for the pilings for the foundation underneath a bridge, officials indicated.
County crews did the work on welding the steel pilings, in order to add new pieces of steel to re-enforce the  bridge supports. The county also poured re-enforced concrete  around the base of the pilings. Glasgow added.
“They are six foot re-enforced piling encasements,” Glasgow explained.
The in-house project, meaning county road crews did the work, was minimally invasive, so any environmental studies of any species in the area or creek, did not have any impact on the project, officials said.
“We didn’t have to do any environmental studies,” Glasgow confirmed.
Once the test results from the concrete are received and all pilings are repainted, plans are to hopefully reopen the bridge to motorists by the end of this month, Glasgow said.
Until the bridge is reopened, motorists on the Double Springs side of the bridge can detour to Highway 195. Those on the opposite side of the bridge can detour down County Road 25 out to Highway 195, Glasgow explained.
“We’re thankful for their patience, and we will be opening soon,” Glasgow pointed out.

The portion of County Road 54, that collapsed earlier this year due to the failure of two older 15-foot culverts, remains closed to through-traffic, due to several ongoing factors, county officials stated.
County Road 54 is the connector road between Dime and Airport roads.
On this road, county crews are working with the Northwest Alabama Council of Local Governments, which administered the $200,000 Community Development Block Grant to be used on County Road 54.
Unlike the restoration of the actual road, following the collapse of a portion of County Highway 48 in Marion County, the County Road 54 collapse will be corrected with a 40-foot bridge that will span the back waters of Quarter Creek or Bear Creek where the road had collapsed.
“In the meantime, I am beginning the plan design on the bridge too,” said Glasgow. “That is where we are at right now.
“Instead of replacing a culvert, a bridge is much more long-term,” Glasgow added.
Since the bridge will span the gap, the culverts that had deteriorated and collapsed, will be removed, allowing for a natural flow of water underneath the bridge, county officials said.
“A bridge should handle much more flow than those two culverts that were in there,” said Glasgow. “It will be a much larger area of an opening.”
Also, now that the funding for the project has been approved, much paperwork has to be done before the project can proceed, officials said.
So far, it is too early in attempting to predict a project start date due to these factors, according to Glasgow.
“When you’re designing a bridge, you’re having to do plans as well,” he said. “You are not just digging a hole and dropping a culvert in.”
Once the green light for the project is received, the next step will be to bid out the bridge project, according to Glasgow.
Once the bids are approved, construction should begin within two months, according to county officials.
“We’re doing all we can to move forward and get this project underway,” said Glasgow.