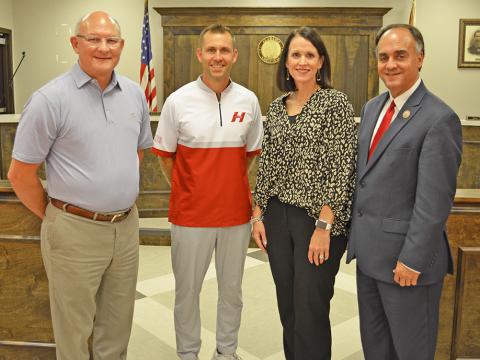 Culver then told Chamber members he could not express his excitement about being back at HCS.
“I have been to several different places someone considered really good school systems, and I am telling you, I have been telling teachers. I have been telling coaches, it’s not like this anywhere else. It is truly not,” Culver said.
HCS, Culver continued, was where everyone was “pulling the rope in the same direction” and being very supportive of one another.
“When you are dealing with kids, I truly believe you cannot have a bad day,” Culver continued. “You have to make a proactive, conscious, choice to be the best you can be for those kids.
“There’s great power in fighting complacency, fighting mediocrity and just refusing to lose,” Culver pointed out. “That goes back to being the home of champions.
“We want kids to refuse to lose in the classroom, to refuse to lose in the community, to refuse to lose on the athletic field, in the band, welding,” he continued.
“What we’re trying to get our kids to understand is you’re capable of more than you think you are,” Culver continued. “It’s our job as adults to set those standards, to keep raising the bar and keep allowing kids to achieve it.”