Paving work on Highways 13 and 129 planned for October 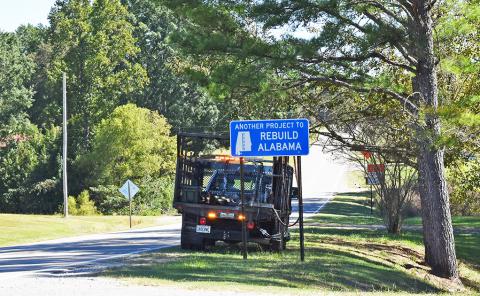 Signs are being placed along Highway 129 in preparation for paving work to begin in October.

HALEYVILLE - The Haleyville City Council learned some details about upcoming paving projects on two of the city's major thoroughfares during their Sept. 19, meeting.

Prior to that discussion, however, the  council approved a couple of projects to help with curb and sidewalk issues.  The first project will replace the curb and gutter at 2613 11th Avenue.  According to multiple internet searches, the property belongs to Sandra D. Wilson.  Three responsive bids were received on the project.  However, two of the bidders - Mike Forester and M and S Elite Contracting - actually did not submit a bid, so the bid was awarded to Precision Concrete of Haleyville in the amount of $9,660.
The curb and sidewalk at the north corner of Newburg Road and Newburg Street will also be replaced by Precision Concrete, which was again the only bidder that placed an actual bid on the project.  The bid was in the amount of $3,500, and was awarded to Precision by the council.
The council authorized Mayor Ken Sunseri to submit an application to the Alabama Department of Transportation for improvements to the Haleyville Airport through projects that would be performed in the 2023 fiscal year.  Sunseri asked City Engineer Calvin Cassady to explain to the council the current project being performed  at the airport and what projects would be included in the FY 2023 proposal.
“You've got an ongoing project now of roughly $2 million to resurface the existing runway, and it's being done. We're sealing the cracks now, probably paving in about two weeks and will have the airport reopened by the end of October. We were unable to include the taxiway and apron in that project, because it was over budget,”  Cassady told the council.
Rehabilitating and paving the taxiway and apron are two of the projects the city will try to get federal funding for in 2023, along with replacing the airport terminal building, Cassady told the council.
“There's a different set of funds we're pursuing on replacing the terminal building, and we will probably submit an application when it's due. The money is available and so we're going to stick our name in the hat to get as much of it as we can,”  Cassady said.
Matches are expected on any federal grant dollars that are provided through the federal government, which would be paid by both the state and the city, each match expected to be anywhere between $60,000-$70,000, Cassady believes.
“FAA has been changing their scheduling and standards, the way they do grants.  They're trying to speed up the process.  Normally we do this in November. This has got to be done by the first of October,” Cassady explained about the resolution the council was approving and why its wording was vague on specific projects.
“We're not sure what funding is available as of yet,” Cassady said.
Cassady also announced that the company that will be paving the Haleyville Airport runway over the next couple of weeks will also be the company that will repave Highway 13 from the intersection with Highway 129 to the Marion County line, with work on that project expected to begin in late October, according to Cassady.   According to the Alabama Department of Transportation’s website, Wiregrass Construction Company, Inc., of Dothan was awarded the low bid of $2,694,626.14, on April 29, for the paving project.  The project will also include repaving Highway 129 from the Marion County line to the intersection with Highway 13.
Council Member Ray Boshell praised the city for having two new police officers on the road patrolling after completing the academy.  He also complimented the paving work done on Rebecca Drive and work recently done around the Haleyville Sports Complex.
Council Member Drew Thrasher told Police Chief Rodney Lewis that he has had several people approach him about doing some type of  education campaign for navigating the intersection at Highway 195 and Highway 13.
Sunseri replied that he has approached ALDOT about moving the stop strip for the left turning lane on Highway 195 back toward Jack’s.
“They said that would interfere with their lighting system.  I said that it would be a lot better for us to have to pay to have that lighting system redone,”  Sunseri said.
The Walker Area Community Foundation will be sponsoring a movie in the Heart of Haleyville Park, Monday, Oct. 3, Sunseri said.  According to the park’s Facebook page, the movie will be the original version of “Jumanji”, starring Robin Williams.
Lewis stated that Haleyville Police are available to assist the Winston County Sheriff’s Office any way they can in the sheriff’s office’s investigation into the desecration of Senior Airman Mark Forester’s grave at Winston Memorial Cemetery.  The sheriff’s office  is the lead agency into the investigation of this crime.
General operation bills and purchase orders in the amount of $483,179.49 were also approved during the meeting.
The next meeting of the Haleyville City Council will be Monday, Oct. 3, at 5:30 p.m. in the courtroom of Haleyville City Hall.  All interested persons are welcome to attend.