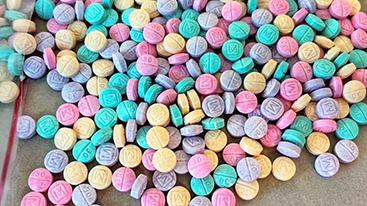 The candy-colored pills pictured above are actually Fentanyl, a powerful and potentially deadly opioid. The Winston County Sheriff’s Office is warning parents to closely look at their children’s Halloween candy, as Fentanyl is being manufactured and packaged to look like candy. (Courtesy photo)

Eward noted that children should go to trunk or treat or church sponsored events to receive candy, but do not go trick or treating at the homes of people they do not know.
If children or young people do receive a suspicious candy, they should not discard it, but call their local law enforcement agency and turn it over to them, Eward further stressed.
People should be very cautious and inspect what they receive, Eward stated.
Young people should never accept candy that is not wrapped, according to law enforcement.
“The parents just need to be really cautious,” Chief Miller added. “The parents are the ones who are going to have to really supervise it and make sure what their kids are getting.”