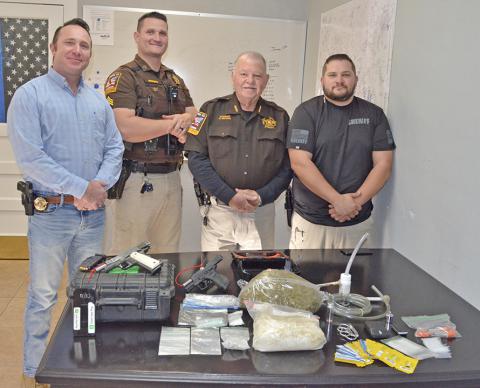 LYNN       - A Haleyville man is actively being sought by multiple law enforcement agencies on numerous drug-related charges after authorities responded to a shooting call to find pounds of meth and marijuana along with Fentanyl stashed in his vehicle.
Warrants have already been signed by the Winston County Sheriff’s Office charging Damion Taylor Gruenberg, 33, of 74 Kidd Road, with trafficking meth, trafficking Fentanyl, three counts of unlawful possession of a controlled substance, one count of unlawful possession of marijuana first degree, failure to affix a tax stamp, certain persons forbidden to possess a firearm and possession of drug paraphernalia, according to Sheriff’s Investigator Jacob Eward.
Gruenberg, who suffered a hand injury in an accidental shooting at 20945 Highway 13 in the Lynn area, was being transported by a private vehicle for medical treatment, when the vehicle was intercepted by the Walker County Sheriff’s Office and Regional Paramedical Service Ambulance at the intersection of Highway 13 and Interstate 22 in the Eldridge area, sheriff’s officials said.
The reason these units intercepted the vehicle was due to the driver of the vehicle having called 9-1-1 about the shooting, authorities said.
“I’ve known Mr. Gruenberg for several years and have known that he deals illegal narcotics in Marion and Winston counties,” Eward stated.
After the vehicle transporting Gruenberg was intercepted, Air Evac landed in the Eldridge area and transported him to UAB Hospital, authorities said. Gruenberg was reportedly treated and released from UAB, but authorities are uncertain as to how he left the hospital, Eward said.
An active search for Gruenberg is underway. Those who may have information on his whereabouts or who may have more information, need to contact the Winston County Sheriff’s Office at (205) 489-2115 or Eward at (205) 489-2024.
The ordeal began on Nov. 13, at 2:30 p.m., when Sgt. Josh Bennett of the Winston County Sheriff’s Office was dispatched to a possible self-inflicted gunshot wound injury to the left hand, with a nine-millimeter pistol having been involved, Bennett stated.
When Bennett responded, he learned that Gruenberg had already been transported from the scene in a private vehicle by another male who had been present at the residence when the shooting occurred, Bennett said.
The interception of the private vehicle by Walker County Sheriff’s officials was due to them trying to find out if the shooting had occurred in their county’s jurisdiction  or Winston County, law enforcement said.
When Walker County learned the incident had occurred officially in Winston County’s jurisdiction, Bennett was notified.
“When I got there, there were multiple Walker County deputies on the scene. They were there and had the scene secured,” Bennett said about the residence where the shooting had occurred.
Bennett contacted Eward to respond. One of the three occupants at the scene, Jessica Gilbert, of Lynn, had warrants on failure to appear and was detained, according to Bennett.  Also on the scene, sheriff’s officials located in plain view drug paraphernalia, including glass pipes and various multiple smoking utensils inside the residence, Bennett noted.
Sheriff’s officials went to the bedroom where the shooting allegedly occurred, finding blood as well as other smoking devices, he added.
Eward learned from talking to witnesses at the scene that Gruenberg had arrived at the Lynn residence in a red Chrysler 200 vehicle, found parked in a carport at the residence, Eward said.
Eward went to the vehicle and saw in the back seat a large bag of marijuana (nearly a pound) in plain view.  In the floorboard on the passenger’s side, a black plastic box was found, containing a bag partially visible, according to Eward. The bag contained a crystallized substance which tested positively for meth, he added.
Eward advised Bennett on the findings, resulting in a search of the vehicle, with deputies finding a black plastic case containing 1.1 ounces of Fentanyl, 16 Suboxone pills, 85 Suboxone strips, one Oxycodone pill, one Lortab pill, 45 green Fentanyl pills, 52 Xanax pills, plastic bags, scales and syringes, Eward reported.
Also found in the vehicle were  two pounds, five ounces of meth in sold ice form, a .45 pistol and a Taurus 9-millimeter pistol (believed by law enforcement to be the firearm used in the shooting), Eward continued.
In the glove box, $573 was found, believed by law enforcement to be proceeds from illegal drug sales, according to sheriff’s officials.
The search also found paperwork, credit cards, mail and a cell phone belonging to Gruenberg, Eward noted.
All of the drugs and related items were seized by the sheriff’s office and taken into evidence, as well as the Chrysler,which was towed from the scene by Lyle’s Wrecker Service of Haleyville, sheriff’s officials said.
“I have filed seizure paperwork on the vehicle and the money that was found in the vehicle,” Eward said. If the court awards the vehicle and money to the sheriff’s office, those items will be used  by the sheriff’s office in the continued fight  against the drug problem in Winston County, Eward stated.
The failure to affix a tax stamp is a charge which has been on the books for years that notes any  controlled substances over eight grams must be taken to Montgomery and a tax paid on it, thus the user receives a stamp, Eward explained.

Bust one of larger ones in county history

This drug seizure is believed to be the largest in some time, according to investigators.
“You don’t really ever see this large amount of methamphetamine at one time,” Eward said
Bennett added, “I am glad we were put in the right place at the right time to get drugs off the street that would, more than likely, end up in an overdose death or in kids’ hands. I am glad we got that large amount off the street that may save a life.”
Eward added that Fentanyl is a drug that is 1,000 times more potent than morphine.
“If it is absorbed through your skin, you can overdose. It takes .01 micrograms to overdose,” he said.
“We’ve got (Gruenberg) hook, line and sinker. We just have to pick him up,” Eward said. “The problem is, he has a lot of connections in different counties because he is not a small-time dealer.  He’s a big dealer, so he has connections in different counties.
“I have been in contact with different agencies throughout northwest Alabama,” Eward continued.

Winston County Sheriff Horace Moore commended his investigators and deputies for a job well done and the good job they do investigating these crimes.
“This is a huge amount of dope that could affect many, many lives - young, old, middle aged,” Moore stated. “I want to let the people know that drugs has been what I have wanted to work on since becoming sheriff, and we’re working hard.
“I know incoming sheriff Caleb Snoddy will do the same thing,” Moore pointed out.
“I am extremely proud of the hard work and dedication shown by my deputies,” stated Chief Deputy Snoddy.  “And, I am equally proud of the seizure of such a large amount of dangerous and deadly narcotics from within the Lynn community.
“I have always taken the crime of distribution and trafficking narcotics very seriously, and I am committed to continue putting those who chose to do so behind bars, making Winston County a better and safer place for the citizens of the Free State,” Snoddy continued.
*When a defendant is charged with a crime, the charge is merely an accusation until or unless proven guilty in a court of law.