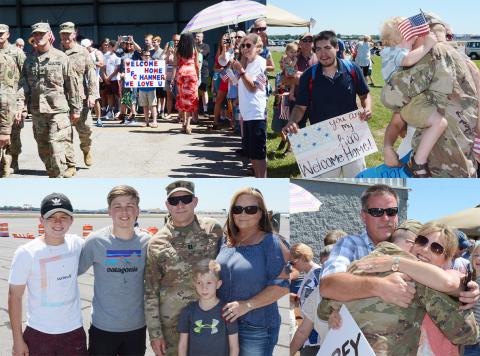 HUNTSVILLE  - The National Anthem sung by Cristina Lynn of Huntsville was blended with the roar of a plane’s engine, as the Southwest flight bringing home the last of the soldiers from the 115th Signal Battalion pulled up on the tarmac at the Huntsville International Airport for short but powerful ceremony Thursday morning, June 6, before soldiers were released to their families.

As soldiers unboarded the plane and gathered in formation on the tarmac, the cheers from the large crowd of supporters grew louder and louder, mingled with their patriotic Welcome Home signs and other decorations.

Once all of the soldiers from the Bravo and Charlie Company from Haleyville and Huntsville had unboarded and gathered into formation, they marched to a grassy area near the hangar where family members were anxiously waiting.

As the marched to the area where the ceremony was to be held at the hangar, the tones from the song Sweet Home Alabama filled the air on a day of clear blue skies and low humidity greeting the soldiers upon arrival.

Major Gary O’Gwin, rear and major detachment OIC for the 115th from Decatur, noted that two units of the 115th--the HHC and Alpha representing the Decatur and Florence area and numbering 100--arrived home Monday, June 5.

The Bravo and Charlie company arriving Wednesday, June 6, represented the Haleyville and Huntsville area, numbering 112, said O’Gwin, who is also known in the area for having been head football coach and assistant principal at Meek High School in Arley.

The 115th deployed 330 soldiers, which departed July 18, 2017, for training at Fort Hood before being deployed Aug. 17 to Kuwait as their headquarters, where they broke out in teams in 10 different countries, O’Gwin said.

Soldiers in the unit who lived out of state or south of Interstate 20 were flown home to Mobile or Atlanta, O’Gwin explained.

Their mission was to provide voice and data communication  to the support of the 160th Signal Brigade throughout those 10 countries in southwest Asia and the Middle East, he added.
The soldiers’ mission accomplished overseas was praised by military officials, as family members shed tears of joy while breathing sighs of relief their loved ones were safe.

“It means the world to these families,” said O’Gwin. “It’s all about the families, the families and the troops coming home.

“These soldiers, they were gone nine, 10 months, and the family spends that entire time conducting daily lives without the husband or the wife at home. This is the pinnacle of it right here.”

Dan Durbin, associate minister at Epic Church in Decatur, who led those present in prayer, announced to the families, “I think I just saw a Southwest airline plane (land).”
This statement met with loud cheers from the large crowd of families and supporters.
“We’re so grateful to the sacrifice that all of you have made for this last many, many months, holding down the homefront while your soldier was away,” Durbin said.

Lynn then sang the national anthem, as the roar of the Southwest engines grew louder and louder.

After the soldiers had unboarded the plane and marched to formation in front of the speakers stand,  Assistant Adjutant General Brigadier General Jerry Martin addressed them.

“I am not going to keep you for 45 minutes, but welcome home,” Martin told the troops. “Family members, thank you so much for being here. It means so much. Thank you for your unwavering support to your soldiers the last year. It’s unbelievable.

Turning to the soldiers, Martin added, “Be safe soldiers. These people, your family members, are in charge. You are not. You need to ease in to your daily affairs, alright?  Let them stay in charge until you get your battle rhythm down and you get adjusted to being back in the real world.

“Your mission is complete,” Martin continued. “I pray God speed upon you and His protection. Do the right thing, watch yourself, be safe if you go anywhere.”

“Let’s give everybody back here a round of applause,” Naugher said. “They did the hard work.”
Naugher then welcomed the troops, thanking them for the job they did overseas. “I’m excited about what you are going to do in the coming years,” he said. “Thank you so much for your service to this state and America.”

“Thank you for being here family and friends. You honor these soldiers by being here with your presence.

“And to the soldiers of the 115th, this nation owes you a debt of gratitude  for your service during this deployment. You did extremely well.”

Command Sgt. Major Bruce R. Light then had the honor of dismissing the soldiers to their families.

What followed were cheers from the soldiers, mingled with their families, as families merged with soldiers for tearful hugs and reunions.

“I just thank God for keeping them all  and doing their job, doing it well and getting home safely,” Sherry added.

Staying in contact with their son during his deployment was a big help, his mother said.

“Finding out what they needed, sending them packages every month, just doing what we can to help, really helped them, so we all worked as a team and stayed busy and made the most of it and saw it through.”

Corey noted it was difficult to describe how it was seeing his family after so many months.

“After first I was kind of numb to it, but once that plane hit the ground, it was just an overwhelming feeling,” Corey stated.

Joey Montgomery, of Double Springs, a supply specialist, noted that he just tried to keep his mission on his task at hand the past several months.

“It’s almost a helpless feeling to know that your wife has to take care of your kids, the household and work and everything else while your gone,” said Montgomery surrounded by his family including wife Jo Beth and daughters, Briley, 7, and Bristol, 2.

Bristol couldn’t get enough of her daddy once he reunited with them, patting him on the face and giving him kisses.

Speaking of Jo Beth, Joey said, “She’s been my rock for me. She took really good care of me. I couldn’t ask for a better wife. She was there when I needed her, talk to her.”
Now that he’s home, Joey said his mind would be at ease, working with his wife in their daily lives.

“The absence was tough,” Jo Beth said. “Him being home is amazing.”

Briley noted she was excited to see her daddy, but said she was going to “ground him,” so he wouldn’t do this again, the family laughed.

“Daddy, I don’t want you to go back,” Briley said.  “Somebody’s got to,” her daddy responded.
Montgomery is a 2004 graduate of Winston County High School in Double Springs.

B Company Commander Brian Bartes of Haleyville, reunited with wife Kimberly and three sons, Austin, 15, Will, 14, and Levi, 9. This marks Bartes’ third deployment with this company of the five total.

“It’s gets longer each time you go,” Bartes admitted. “You get set in your ways and then it changes as you get older.”

Their mission is to provide the U.S. Armed Forces and U.S. agencies with tactical and strategic communications, Bartes said.

“You get home and it’s nice to be able to walk around and not have to be looking over your shoulder all the time,” he said. “You feel you can relax a little bit.”

Bartes also makes an adjustment each time he comes home because, “I have lost three years of my children’s lives,” he said referring to all of his deployments.

“You just try to put it out of your mind. The guys in World War II, they were gone for five to six years straight,” he said.

Kimberly stated her role is difficult while her husband is away. “We have three boys. They test, but they also protect mom,” she said. “Dad not being there, they feel like they need to step up and bet the man of the house.”

“I am glad he’s back,” son Austin said, “to come watch us play sports and stuff. I know our house will be back the way it was.”

“The older your kids get, I think they need you more than when they were little. It gets tougher and tougher each time we’re away.

“It’s a good feeling to be home,” Plott added. “You just don’t realize how God has blessed us here in America to have what we’ve got.”

Now that the soldiers in the reserve unit have been released to their families, they will be on leave for about 30 days, after which time they will return to duty in drilling in August.

Previous deployments of the 115th were Operation Iraqi Freedom in Iraq from 2004-2005 and Operation Enduring Freedom in Afghanistan in 2011-2012.