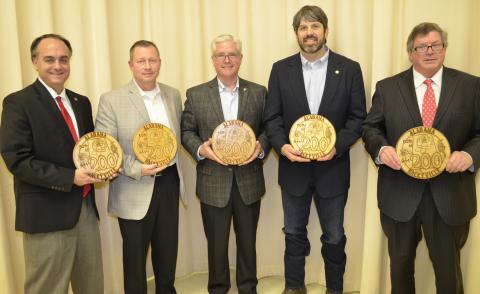 This marked the first time all of Winston County's delegation, featuring three newcomers elected in 2018, had been seated at the same table at one time for discussion at a public event.

Representatives Tracy Estes, Proncey Robertson and Tim Wadsworth were joined by Senators Greg Reed and Garlan Gudger for a informative meeting, where, from the stage area of the cafetorium, the team discussed issues of importance in the upcoming legislative session in Montgomery, as well as stressed that teamwork between the incumbents and newcomers, including Estes, Robertson and Gudger, was key in moving the state forward.

Each of the legislative team spoke about 10 minutes about themselves and issues they saw as prevalent then answered numerous questions from different members of the audience, which comprised school officials as well as city, county and even federal representatives. Issues from the audience included gas tax monies for roads, as stressed by Winston County Commission Chairman Roger Hayes to the need to finish the major highway project for the Haleyville area, as posed by Chamber of Commerce member Stan Watson Sr.

Other issues were career and technical education questions from Scott Shipman and Dr. Bill Bishop to the funding of pre-kindergarten as asked by school board member Donna Jones.  Ashley Pool, COO of Lakeland Community Hospital, asked about funding for rural hospitals and Kathy Preston requested funding to assist in a major project of revamping the town's major water leaks in Bear Creek.

The Meet and Greet also featured some highlights, such as a special thank you card presented by Band Director Judd Williams to Estes, in appreciation for Estes having a big role in helping the 8th-12th grade band march in Governor Kay Ivey's inaugural parade Monday, Jan. 14.

Also HCS Superintendent Dr. Holly Sutherland gave a state of the school address, during which she discussed about the grant the system received to help celebrate Alabama's Bicentennial in 2019. The drafting class of Jamie White and agriscience class of Jeff McKinney made wooden seals with the Alabama Bicentennial logo, which were presented to each member of the Winston County delegation. Other seals will be distributed to the community, Dr. Sutherland said.