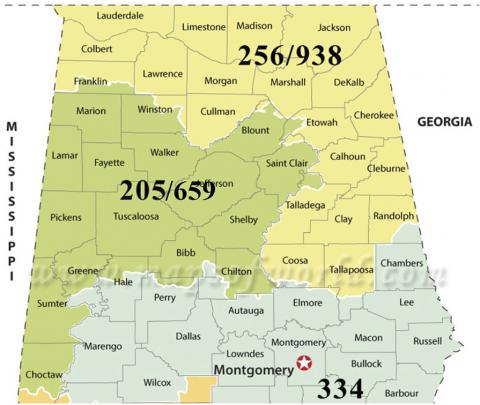 WINSTON/MARION - The way persons living with a 205 area code make phone calls will significantly change Saturday, Oct. 12, but there will be no extra cost to customers.

In 2018, the Alabama Public Service Commission approved a new area code overlay for parts of west and central Alabama, to be used in conjunction within area code 205. The new number is 659.  Because of the new area code going into effect, persons with a 205 area code will now have to dial all ten digits in order to get a call through, even with local calls.  As of Saturday, calls made without dialing the prefix first will no longer connect.

For example, one call from Haleyville to another number in Haleyville will result in a recording error if the area code is not dialed first. Between April and October, users may or may not dial the area code first, which lets users get familiar with the new dialing procedure.

The overlay is done to avoid costly financial and business hardships. For instance, if a new area code was given to a geographic area without the overlay, the telephone number must be changed in all aspects, i.e., fax machines, business cards, billboards, etc., not to mention the headache of consumers giving their contacts the new ten digit phone number. With this overlay, future numbers may be given either the 205 or 659 area code beginning Nov. 12, 2019.

While area code 256 currently has an overlay with the new area code of 938, it is not implemented due to the fact 256 is not near exhaustion with the numbers unlike 205. The 205 area will be the only location in Alabama that must dial the area code first beginning Oct. 12.

The area code overlay is happening due to a survey predicting the 205 area code will be exhausted by the year 2020, according to the document released by the APSC. This ensures a continuing supply of telephone numbers.

The new area code overlay will be the sixth area code for Alabama. The entirety of Alabama used the 205 area code from 1947   to 1995 when 334 was introduced for South Alabama. Area codes, or the North American Numbering Plan, came into existence in 1947. In 1998, 256 began for the northern and eastern portions of the state, including places such as Huntsville, Russellville, Cullman and Addison. The next change was to south Alabama with the addition of 251. The last change came in 2010 when an overlay for the 256 coverage area with 938 began.