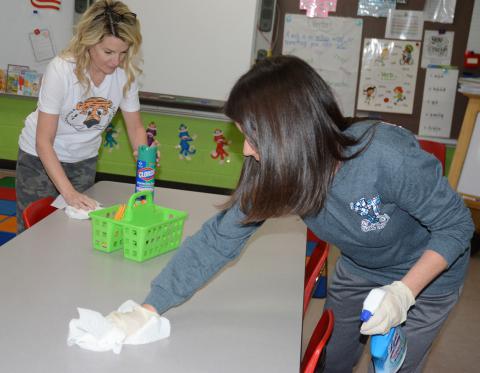 HALEYVILLE  - The outbreak of the flu virus has spread like wildfire through different parts of the state, causing several schools, including Haleyville Elementary, to close their doors Thursday, Jan. 30  and Friday, Jan. 31,  in order to thorougly clean and disinfect before students return Monday, Feb. 3.
In Winston County,  only Haleyville Elementary is closed for these dates, with classes and activities carrying on as normal at the middle school, high school and center of technology, school officials said.
The reason HES is closed through Friday, is the percentage of students absent Wednesday, Jan. 29, being over 25 percent.
This is the absence percentage where the Alabama State Department of Education recommends schools close in order to clean and disinfectto cut down on the spread of the flu.
HCS Superintendent Dr. Holly Sutherland had been checking closely with state officials  the past several days, as absences at the elementary school due to flu continued to rise.
In fact, absences climbed from around 22 percent Tuesday, to between 26 and 27 percent the following day, prompting Sutherland to make an all-call to parents and students.
“Due to the number of confirmed flu cases, as well as the percentage of our students who are experiencing flu symptoms, Haleyville Elementary will be closed Thursday and Friday, Jan. 30 and 3,1 for deep cleaning and disinfection,” Sutherland sent out in the all-call at noon Wednesday, Jan. 29.
Sutherland recommended that in order to stop the spread of the flu, parents or guardians should keep their children at home.
“We discourage play dates and other group activities during this time,” Sutherland informed. “If your child or anyone in your home is experiencing flu symptoms or does not feel well, he/she should not be at ball games and other community activities.
“The only way for us to combat the spread of flu is to keep children who have been exposed at home,” Sutherland further stated.
Sutherland noted that school officials are monitoring absences on both the middle and high school campuses, but since their percentages of absences have been much lower, they will be operating on a normal routine and schedule.
“Students will be excused from HHS and HMS with a doctor’s note,” Sutherland said.

On Thursday, teachers and staff members at Haleyville Elementary were busy disinfecting not only tables or desk top surfaces, but also walls, books and other items that come in contact with students during a school day.
Many teachers, using cleansers or disinfectants, opened windows in order to filter out any germs or the intense smell of the cleansers.
Paige Hooker, nurse  at the elementary school, noted symptoms with this strain of flu were odd compared to other strain. In fact, the number of students visiting her before school closed was so great that extra chairs had to be brought in, she said.
Some students have fever, others have other symptoms of sickness,  but are still just as contagious.
“I have some kids come in and the only symptom they have is their eyes are burning, no fever. They go to the doctor and they test positive,” Hooker explained.
In such cases, parents should check their child’s fever before sending them to school. What should be noted here is that if a child is on fever-reducing medication, the fever will appear lower, but the child could still be carrying the germ and not know it, Hooker said.
“I had one (student) come in and the only thing he could tell me was he was dizzy,” she said. “He tested positive.”
HES has been dealing with both Type A and Type B flu. Type A is more commonly accompanied by stomach issues, Hooker explained. Several students, she added, tested positive for Type A, went home, returned to school and later tested positive for Type B.
“They are missing 10 days of school, at least,” said Hooker. “I have never seen it like this where I have had this many children coming in.”
One student came in complaining his feet were hurting, so that he could hardly walk. Another student said his finger was hurting. These students tested positive for the flu, Hooker further explained.
“They don’t know how to tell you. They are little,” she said.
The grade levels hardest hit with the flu iare kindergarten through 2nd grade, according to Hooker, noting that children in other grade levels are also testing positive.
Parents need to wait 24 hours after a child is fever free without having to take any fever reducing medicine, before that child is no longer contagious, Hooker emphasized.
Before the dismissal, every time a class would leave a room to go to lunch, for example, teachers and staff members would disinfect.
The school system purchased what many call germ blaster guns that can be used to quickly and safely disinfect a surface.
School officials stressed they never spray in areas to endanger kids, but wait until kids have left a certain area before disinfecting.
Despite these ongoing measures to clean and disinfect, the high level of students at the elementary experiencing flu-like symptoms, accompanied by children coughing or sneezing into the air, rubbing their eyes after touching a surface touched by children carrying the flu virus, has kept the flu on the rise, school officials indicated.

“The incubation is two to four days,” Hooker said. “Once you are exposed, you have the maximum of four days. This is a weak strain. It does die quickly on surfaces.”
First grade teacher Robin Wilson noted she had only three students in class one day this week and two students in class another day. Normal class size is 18, she added.
The flu became more rampant on Friday, Jan. 24, and continued into the past weekend, Wilson added.
“They look like they’ve been in a tanning bed,” she said describing students who are sick.
Wilson is concerned that the closure of the elementary school will cause teachers to be behind in their lessons.
“This has put us a week behind, so everything I had planned for this week, I have to do next week,” said Wilson. “I have some  kids who are not coming back until Wednesday.
“When you have two to three kids, you can’t introduce them to a new skill,” she continued.  “The two (students) who were here, one of them had the flu last week. The other kid who was here, I know he will get it because his brother already has it.”
While cleaning and disinfecting her classroom,  Wilson had to throw away Expo markers, glue sticks, pencils and crayons because they have been contaminated with the flu virus.
“I am soaking their scissors. I am soaking my dry erase boards.  That’s expensive,” said Wilson.
Teachers are also removing paper art work from hallways, as well as displays inside classrooms because the items have been in contact with students while the flu was running rampant.

“At the water fountains, they put their mouth on the spout,” added Elementary Media Specialist Jennifer Haughton.
Haughton, who works in an area of the school central to all students, noted traffic in the library has been down due to so many students absent from school.
“Every single class had two or three or more out every single day,” Haughton added. “It’s just hard for little kids not to spread germs when they share all these computers.”
After one class leaves the library computer lab, staff will disinfect, only to have the new class with germs come in, Haughton said.
“Little kids are going to touch their face and their nose. It’s  hard for little children not to spread it,” she added.
Also, when there was no traffic in the library, staff would disinfect tables and books, Haughton said.
“We clean every day,” she said. “Whether there’s sickness or not, you are cleaning your tables  and all just to start your day fresh. It’s a testament to how strong the (flu) bug is.”

Wilson is sending out a message that she is in need of crayons, as well as Expo markers, paper towels, wipes and disinfecting products.
“We have used everything we have,” Wilson stated.

State Representative Tracy Estes noted he supported the decision of superintendents of schools affected by high levels of the flu to temporarily close their schools.
“It’s hard for teachers to teach if children are sick,” Estes said.
“It’s a tough decision, but I commend them in making it. I think in the long run, it will be well served to let the children go home, let everyone get away from each other a little bit and let this thing die down,” Estes added.

Middle School Principal Bo Wilcoxson noted the school normally houses  385 to 390 students in grades 6-8.
“On an average day, we usually don’t have anymore than 10 to 11 absences,” Wilcoxson noted.  On Wednesday, Jan. 29, the school had 38 absences, he added.
“Today, we did have about 15 to 20 students check out,” he said. “Our absences have gone up to a higher than normal standard here in the last few days. Based on that number, we have about 12 to 14 per grade out right now.
“Our biggest concern is children going home with brothers and sisters that do have (the flu)...We are concerned about that, and we’re taking  precautions to prevent that from happening.”
High School Principal Davey Reed noted, “It really hasn’t hit the high school like it has the elementary school.”
On Wednesday, Jan. 29, 10 students were absent from the high school due to the flu, Reed noted.
“It just kind of came upon us all of a sudden,” he pointed out. “We’re hoping that it’s peaking right now.”
Overall, older students have a better immunity system than the younger students, according to Reed.
“In the elementary, they are in closer contact than they are at the high school,” he said. “A younger kid has not experienced as many fevers as an older kid, and they can verbalize when they are older...they say, ‘Hey, I may have a fever.’
“We have to help (elementary students) meet their hygiene needs more than a high school kid,” added Reed.

Winston County Schools Superintendent Greg Pendley noted that none of the schools in the county school district have absences or percentages of absences that are close enough to consider closing schools at this time.
“We’re monitoring the situation.  Presently, we don’t have those numbers,” Pendley stated. “We have some, obviously. It might be 10 percent at that.”
That 10 percent would be countywide and not at each individual school in the district, Pendley explained.
“Our nurses do an excellent job monitoring the situation, keeping us informed at my office,” Pendley said.