Man loses everything in house fire 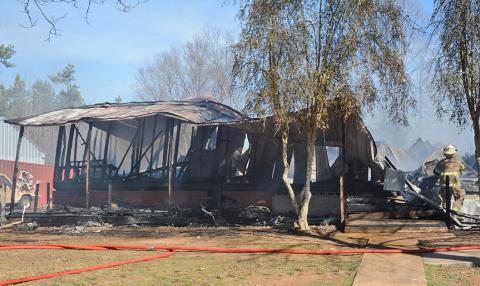 Firefighters battle the blaze and check for hot spots. The fire consumed the residence.

BEAR CREEK   - The Alabama Fire Marshal is scheduled this week to begin an investigation into the cause of a fire that destroyed the home where a Bear Creek man had been living, resulting in the loss of all of his possessions.
Franklin Garrard, 82, had reportedly been living in a section of a house which is owned by Carol Mitchell, located at 250 County Highway 106, off Highway 241, when the fire occurred on Monday morning, Feb. 3.

Bear Creek Police Chief Joey Franks was one of the first to spot the blaze.

“Actually, I saw the smoke when I was leaving work,” Chief Franks stated. “I saw smoke coming up. It was too big to be a brush fire. I started looking for it.”
Police reported that the Alabama Department of Transportation officials in the area saw the smoke from Highway 241 and contacted authorities.

When Chief Franks found the fire and arrived on the scene, he notified authorities by radio of his location.
“It was fully engulfed,” said Franks. “Flames were coming out the front.”
Neighbors informed authorities on the scene that no one was home when the fire occurred, since the occupant’s vehicle was not on the scene, police said.
Franklin and his son, Johnny Garrard, had been out of town that morning paying bills in Hamilton when Franklin dropped off his son at his residence and was returning home.
Franklin noted he saw smoke on his way home, but thought it was a brush fire. When he got to the entrance of his drive, he found it was being monitored by the Bear Creek Police Department.
“I didn’t know anything until the police told me,” Franklin said. “They wouldn’t let me in because fire trucks were coming out and in.
“I asked the chief of police, ‘what is going on’  and he said, ‘your house is burnt,” he said.
“I saw this fire from my house, and I live (near) North Industrial Park,” Johnny noted.
The Bear Creek Fire Department rolled to the scene  at 11:55 a.m., arriving on the scene at 12:02 p.m. with a pumper, tanker and a rescue unit and received assistance on mutual aid from Haleyville, Hackleburg and Craft departments, noted Bear Creek Fire Chief Rob Taylor.
“Smoke was visible from downtown Bear Creek before any trucks went in route,” Taylor said. “When trucks arrived, the house was fully involved.”
The Alabama Forestry Commission also responded to the scene, setting up a perimeter or a fire line to prevent the fire from spreading further into the nearby wooded area, Chief Taylor said.
Fire from the residence had already spread to burn about one acre, Chief Taylor noted.
Haleyville Acting Fire Chief Terrell Baccus noted that department responded with a pumper, tanker and rescue truck.
“(The house) was on fire from one end to the other,” Baccus pointed out.
Haleyville laid a line to Bear Creek’s tanker and made at least three trips to a nearby hydrant located at the Bear Creek water tank near Highway 241, to refill their water supply, he said.
Total gallons of water applied to the blaze, from all departments combined, were 25,000, according to Chief Taylor
Franklin and his son were on the scene as firefighters battled the blaze, leaving mainly just the outline of the front porch barely intact with the remainder of the house in smoldering ruins.
In discussing the loss of all of his possessions, Franklin became emotional and was comforted by his son, who reminded his father that material possessions could be replaced, and that his father and his pet dog were alive and unharmed.
“He and his dog are here. That’s what matters most,” Johnny said.
“I just lost everything,” sobbed Franklin, as he sat with his dog near his son at a shed on the property, as firefighters battled the blaze.
“There are things in there I will never get back,” Franklin continued.
“Move forward. You can always move forward,” Johnny told him.
Those who can make donations to help Franklin can contact Johnny at 205-269-2957.
“Right now, he needs clothing and bedding,” his son said. Franklin also lost his Playstation games that he would frequently play, as well as items for his dog Merlin.