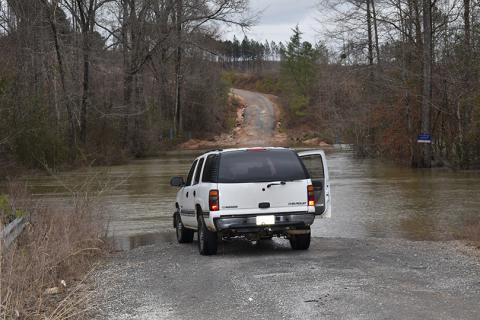 Splunge Creek flows out of its channel and across County Road 339 with the recent rains. The Chevrolet Tahoe shown has been extracted from the creek after occupants tried to cross.

LYNN - Winston County has received a lot of rain this week, especially Wednesday, Feb. 12, with the Haleyville weather station of the National Weather Service reporting just over two inches of rain that day alone. When a storm system comes through with heavy rain involved, there are several places in southwest Winston near Lynn which flood. Splunge and Browns creeks, both flowing under County Road 339 normally, flow over the road in the low-lying area, as the water channel cannot handle the load.

Two individuals found out the hard way why it is not a good idea to try to drive through a flooded roadway. It was a no-go situation when the driver of a Chevrolet Tahoe made it just over halfway through Splunge Creek on County Road 339 when the vehicle stalled.

Lynn Volunteer Fire Department was called to the scene at about 3 p.m. Thursday, Feb. 13, with the Winston County Sheriff's Office dispatched at 3:01 p.m. to assist. A private citizen also arrived on the scene with a logging truck and extracted the vehicle from the creek.

"We barricaded (the road) this morning," Chris Tittle of the Winston County Road Department said. "It was not as deep this morning, but it was enough we felt we needed to barricade it. We got a call that someone had moved the barricade and was out in (the creek)."

"We put up barricades for a purpose: to have people turn around," Winston County Commissioner David Cummings said. "When people drive around or move the barricades, it puts their life and everybody else's life that comes along in danger. If you move a barricade and go around, I think you should go to jail. That's jeopardizing the next person that comes down the road. It's unnecessary."

No injuries were reported during the incident, though the vehicle occupants were in the water with an air temperature of 40°F and a wind chill of 34°F. The depth of water crossing the roadway was estimated between three and four feet deep.

"The barricade was just off to the side," one occupant said. "We thought we could make it through. We weren't trying to make a spectacle of it. I've been through here a million times with my Honda Element. With the barricade being off to the side, we thought we could drive through like we thought everybody else was doing, and it wasn't the case. We had to push it back from about halfway. It's usually not as deep. I didn't realize it was that deep. Old hillbillies trying to get across, going back to Rufus Mann Road, we didn't think it would be that big of deal."

"It's unfortunate we have flood zones in Winston County," Cummings added. "We know where they are, and when the rain starts, we start monitoring. When the water gets over the roadway, we barricade it."

The Splunge Creek bridge was replaced with culverts in 2004, and while the area has always flooded, the flooding problem was not addressed at that time.

Another nearby area prone to flood is at the intersection of County Road 37 and 70, where Splunge Creek, Browns Creek, Blackwater Creek and Water Branch intersect.