Family needs help after being displaced by fire 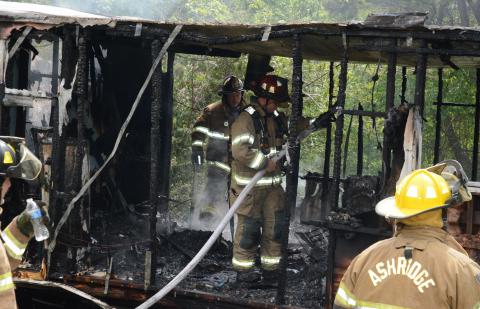 Firefighters from Ashridge and Double Springs departments check for hot spots after the main blaze is extinguished.

ASHRIDGE  - A family, including two small children, lost everything they had and need the publicâ€™s help in starting over, after a raging blaze destroyed their home Friday morning, April 24.
â€œI donâ€™t have shoes. Neither one of us has any clothes,â€ noted Matthew McMillin, who with girlfriend Terri McDonald and two children, Alexander, 2, and Aubrey, 3, were displaced by the fire which was first spotted in a childâ€™s bedroom.
Terri was at work when  the fire was first spotted.
â€œI was up here at my momâ€™s,â€ said McMillin, whose mom lives in a manufactured home just across the yard from the familyâ€™s single wide home that was destroyed.
â€œI brought the kids up here like I do every morning,â€ he recalled. â€œI came back outside and saw smoke coming from one of the bedroom windows.
â€œI turned around and told mom to call 9-1-1, the house is on fire,â€ McMillin said. â€œI was up here maybe 10 minutes.â€
The Ashridge Fire Department was called to 113 County Road 3127 on a structure fire, responding with two pumpers and assisted by Double Springs, which brought their fleet.
Firefighters arrived to find the single wide fully involved, noted Ashridge Fire Chief Dewayne Baker.
The middle section of the home was heavily involved in flames, with fire also rolling out of the roof, Baker stated.
Firefighters began an exterior attack.
â€œWe had a lot of smoke and flames coming from the front of the building,â€ noted Lt. Erik Gilbreath of the DS Fire Department.
â€œThe wind was pushing (the fire) toward the back,â€ Gilbreath stated.
DS deployed a water line from their pumper, assisting Ashridge in  attacking the fire from the front, then deploying a second line to fight the blaze from the back of the residence, he said.
Ashridge and DS had the fire beat down in about 45 minutes to an hour, Baker stated.
Firefighters were then able to make an interior attack, checking for hot spots through smouldering debris and charred remains.
Sections of floor were so weak that it collapsed, as firefighters made attempts to walk across in checking hot spots.
In all, both departments applied about 3,000 gallons of water to beat down the blaze, according to Baker.
Firefighters had laid a line from a nearby fire hydrant near Highway 195, but were able to use the storage capacity of their trucks, he said.
The fire primarily gutted the entire interior of the home, with only a bedroom used for storage at the far right of the residence possibly salvageable, Gilbreath noted.
â€œItâ€™s sad when somebody loses everything theyâ€™ve got,â€ Baker added.
The American Red Cross has been contacted to provide assistance to this family, which desperately need clothing and items for their children as they are starting over with their lives.
Those who can provide monetary donations or any form of assistance for this family are urged to contact them at 205-300-4227.
â€œI donâ€™t think I have any words,â€ McMillin said in describing their loss. Terri appeared very emotional.
McMillin said it was important first and foremost to provide for the needs of his working wife and children before himself.
Clothing sizes for the children are 3T and 4T, Terri said.
McMillin wears a size 11 in shoes. The children do have some clothes at their grandmotherâ€™s house but are in need of more clothing, toys and other items in starting over.
While on the scene, Lt. Michael Meadows with the DS FD presented stuffed animals to the children. The fire department carries stuffed animals in their vehicles in cases like this, to present to children who have suffered a traumatic event.
â€œThis (home) was pretty much a 100 percent loss,â€ Gilbreath pointed out. â€œThey definitely will not have any clothes, too much smoke damage.â€