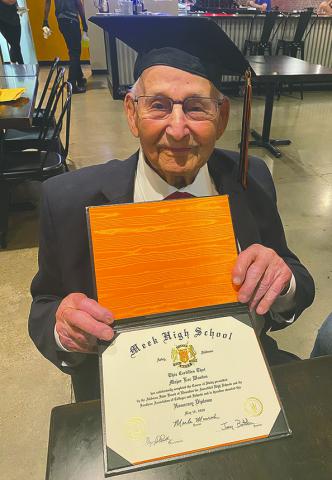 Major Lee Wooten proudly displays his diploma from Meek High School. He graduated this year at 103.

MADISON - “At our age, we’ve heard everything, we’ve seen everything, but we just don’t remember everything,” Major Lee Wooten laughed. “I got a kick out of that.”
Wooten, who is 103 years-young, is referring to a recent birthday card his daughter-in-law received. He may have seen and heard everything, but he most definitely has not forgotten everything.  He is also continuing to gain new things, such as a high school diploma.
Wooten recently was awarded an honorary diploma from Meek High School.  Wooten was attending Meek in the 1930s when he had to drop out to help support his family.
“I have known about Mr. Wooten from our lunchroom manager, Ann Wooten Harbison, who is one of his nieces,” Marla Murrah, Meek High School principal, said. “She has shared stories of his life, but recently she told me that he was not doing well physically due to heart problems. She also told me he never graduated from high school due to having to help his family because his father passed away. I contacted other members of his family and worked with them to make one of his dreams of graduating from high school a reality.”
“They gave me an honorary high school diploma with a cap and gown,” Wooten proudly stated.  Wooten qualified for the honorary diploma due to his service to the nation in World War II.