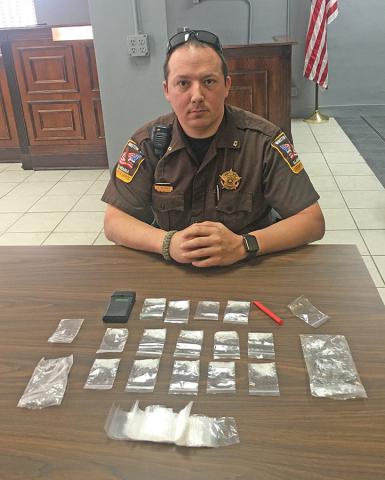 HALEYVILLE   -  A total 21 grams of methamphetamine have been taken off the streets and the passenger of a suspicious vehicle arrested, resulting from a routine patrol in the Highway 13 area on Wednesday, Aug. 19.
Taken into custody was Derrick Keith Tyra, 35, of County Road 3470 Haleyville, charged with possession of a controlled substance with an intent to distribute and unlawful possession of drug paraphernalia, noted Winston County Sheriff’s K-9 Deputy Jonathan Oliver.
“This is a repeat offender taken in by the sheriff’s office on drug charges,” Oliver stated.
“We’ve received several complaints from citizens regarding hearing traffic and the suspected sale and use of narcotics in the area,” he stressed.
Around 10 p.m., Oliver was patrolling in the area of Newburg Road and Highway 13 when he observed a white sedan appearing to have an expired license tag, he said.
When dispatch confirmed the expired tag, Oliver initiated a traffic stop in the parking area of the Wavaho station on Highway 13, Oliver said.
“When I approached the vehicle, both occupants were acting in an extremely nervous manner, very fidgety, unable to maintain eye contact,” he said.
The driver upon request could not produce a valid driver’s license, so Oliver requested the same from the passenger.
“While at the patrol vehicle checking information from dispatch, I observed both occupants to be moving around a lot in the vehicle,” said Oliver.
Oliver wrote the driver two warnings, asking her to step out of the vehicle so the warnings could be explained to her.
At this point, the driver gave verbal consent to search the interior of the vehicle, at which time Tyra was asked the step out of the vehicle, according to Oliver.
A search of the vehicle produced a large plastic bag, found between the passenger’s seat and center console, that contained several smaller bags of a crystallized substance that tested positive for meth - a total of 21.4 grams, Oliver said.
Found between the passenger seat and door was a set of digital scales containing residue possibly of a controlled substance, he added.
Upon finding the narcotics and scales,  Tyra made a spontaneous statement that everything was his, according to Oliver.
Upon a detailed search of Tyra, several bags were found in his shorts pocket, containing a total of six grams, as well as a cut straw used for ingesting narcotics, he noted.
The driver did not face any drug-related charges, Oliver noted.
“It’s great to get the narcotics off the street,” he said. “It’s never good to see individuals who are mixed up in it.”
Oliver thanked Sgt. Eddie Collins and Officer Wesley Donaldson of the Haleyville Police Department for their assistance and teamwork at the scene.
Tyra was transported without incident to the Winston County Jail in Double Springs, but made bond and was released the following morning, authorities said.
Tyra reportedly told law enforcement  had it not been for Bojan, the sheriff’s office K-9 unit, barking, he would have fled the scene, Oliver stated.
*When a defendant is charged with a crime, the charge is merely an accusation until or unless proven guilty in a court of law.