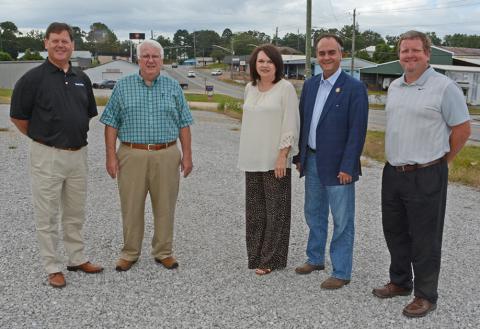 DOUBLE SPRINGS   -  Many in Winston County may take the name Double Springs for granted as the county’s seat, while others through the years have questioned the origin of its name.
The  donation of  half an acre of land from BankFirst to the Town of Double Springs will be used for a park to celebrate the history of the town -- which received its name from  natural dual springs of water located in the area where the park will be located off Highway 195.
Town and state officials recently gathered at the site of the future park to officially dedicate the site for an area, not just to honor the legacy of the double springs, but also as a place to honor veterans in an area of scenic landscaping.
“You have a lot of people who come through Double Springs, and they want to see the actual two springs,” noted Double Springs Mayor Elmo Robinson, who grew up in the town.  “This will give us a chance to do a replica of it, and it’s in the area where the two springs were originally at.”
The area to which Robinson referred was the area in the central part of Winston County, where two clear springs of water ran side by side, described as a rarity in nature.