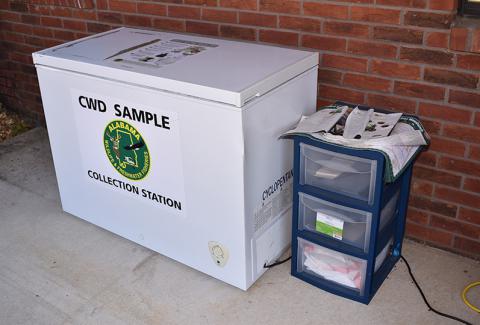 This freezer is at the front of the U.S. Forest Service office on Highway 33 in Double Springs. Chronic Wasting Disease samples are to be left in the freezer.

HOUSTON - Clorox cannot kill the disease. A temperature of 3,500 degrees Fahrenheit will not kill it. Chronic Wasting Disease, first identified in 1967, is a protein deficiency in the genetic makeup of deer, moose, caribou and other similar animals, including reindeer. While the human population deals with the COVID-19 pandemic, the CWD is creeping close to our area. Some officials believe the disease is already here and that it just has not been found yet.
Matt Brock with the Alabama Division of Wildlife and Freshwater Fisheries mentioned at the Winston County Natural Resources Council meeting on Thursday, Nov. 19, that he has freezers set up at different locations throughout west and northwest Alabama, including Winston County. The local freezer is located at the U.S. Forest Service office in Double Springs on Highway 33. Hunters who wish to test deer for CWD can leave a sample in the freezer.
“Freezers are scattered throughout the state,” Brock said. “We have saturated the northwest Alabama counties, which is close to Tennessee and Mississippi. It’s just a matter of time before we detect it. Thankfully we haven’t so far.”
Brock will be traveling through the area collecting samples from the freezers through February.
“In north Alabama, I go around on Mondays and collect samples from the freezers,” Brock explained. “It usually takes two to three days to thaw out. I usually get them to the lab by Friday.”
Results should be in within seven to 10 days, although Brock suggests waiting two to three weeks on the results.
“If you haven’t heard anything in three weeks, I would go ahead and consume the meat or whatever you planned on doing with it. Not hearing anything is good news. If you get a call from the state lab, there’s a problem. Thankfully, we haven’t had to make that call yet.”
The freezer at the forest service office in Double Springs has a list of instructions on it.
1. Remove head from carcass, leaving four to six inches of neck attached to head.
2. Remove antlers from bucks - antlers can be removed with skull plate or at the base of each antler.
3. Place head in the provided plastic bag and tie bag closed.
4. Complete all sections of the Biological Sample Tag.
5. Remove and retain receipt portion of Biological Sample Tag.
6. Attach upper portion of the tag to plastic bag containing the deer head using a zip tie.
7. Place tagged bag containing deer head in freezer.
Brock proceeded to explain a big change in procedure on deer transfers this year.
“If I kill a deer and I want to donate it to you, I have to give you a certificate of transfer. If I take that deer to a processor or taxidermist, they have to record that information there as well. Until the person who killed the deer receives the finished product, everywhere it goes, that certificate has to go with it.” Brock also said this was currently in effect, and this was done in effort to increase participation in Game Check, which is an app used for hunters to submit information on the deer they kill. The information can also be entered online at outdooralabama.com or by calling telephone numbers found on the website. The number for this district is (205) 339-5716.
Brock said there is low participation in samples due to the deer not being logged in the Game Check program. He encourages people to use this program, but he is only collecting samples to test for CWD and not to turn in to law enforcement.
Head samples of the deer are left in the freezers for sample collecting.
Signs of CWD can include emaciation over time and loss of fear of humans, among other behavorial changes. It is progressive and always fatal.
“We kicked off our Eastern spotted skunk survey,” Allison Cochran, wildlife biologist, said regarding other forestry news. A sighting of the animal has been confirmed in the Kinlock area. This type of skunk is on the state-protected species list with a high conservation priority.
“We wrapped up the feral swine program this year with big numbers,” Cochran added, mentioning numbers reached 150 of caught and trapped swine.

Filming for FAWN
One of the most difficult years the public has ever seen is drawing to a close. Effects from the COVID-19 pandemic, whether directly or indirectly, will be felt for many years to come. Firewise Awareness Week Now, usually held every October, was canceled in the traditional sense earlier this year. In its place, forestry officials decided to create videos to upload to the internet so this year’s sixth graders will get to participate, albeit in a non-traditional way.
Yearly, sixth graders have been sent to the Houston Recreation Area where multiple stations were set up to learn about different aspects of forestry, from wildlife management to fire prevention to River Kids. In some instances, the event was canceled in previous years due to inclement weather. The videos being created this year will be used in the future if the event is rained out.
“I hope we get back to traditional FAWN down the road, but I think this is something we can use,” Cochran said. “I don’t think it will be a one-time thing everyone put a lot of effort into.”
It was announced filming is nearly complete. Immediately proceeding the council meeting, the wildlife conservation station was recorded on the Nearpod which had previously been purchased to record the videos.
“The fire footage has gone to Jimmy Madison, who does photo editing,” Kerri Roberts, 4-H Extension agent, said. “He’s adding music. We wanted to get the videos to the school by Nov. 30.”
T-shirts have been ordered for the students. The principals at the schools are aware of what is taking place with FAWN this year, Roberts mentioned. She also stated the Nearpod software will log how many people watch the video to provide some type of feedback.
While the videos were not complete by the time FAWN was scheduled, the videos will still be shown at school, whether or not the student is virtual or in a classroom.