Projects lined up for HCS 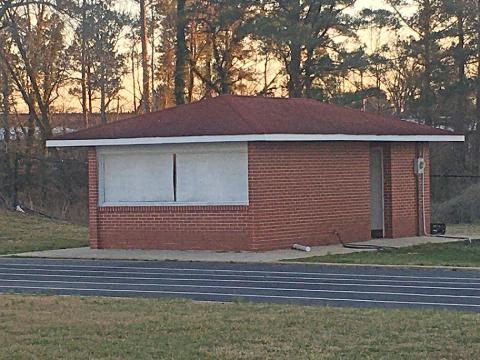 The visitor’s side concession stand and restrooms at Haleyville High School’s football stadium may soon be replaced with a larger multi-purpose building. This is one of several capital improvement projects being discussed for the school system.

HALEYVILLE    - Although Haleyville City Schools has several building projects in the works and also has decisions pending regarding hires, officials assure that projects are being done one-at-a time and decisions are being made regarding the financial best interest of the system as a whole.
During a recent work session of the Haleyville Board of Education, Superintendent Dr. Holly Sutherland reviewed several capital improvement projects being discussed throughout the campus, as well as gave the board two options regarding a position in maintenance and grounds that needs to be considered.
The school board is considering two options, either hiring a person skilled in HVAC who also would do light maintenance, or hiring an additional janitor who would also work grounds so no janitor is split or duties divided between campuses.
The janitor would be responsible for light maintenance, filter replacements, as well as working the grounds throughout the campus, Sutherland informed.
This will help out HCS Maintenance Supervisor Adam Knight. Plans are to make a decision on the position at the board meeting March 16.
“Right now, every school is split one person,” said Sutherland, referring to personnel alternating their work in the area of grounds and maintenance.
School Board President Donna Jones spoke about uncertainty regarding the system’s future finances, stating the school system would be “biting off a big chunk” in hiring an HVAC-certified person.  The salary for an HVAC-certified individual would be $65,000 annually, including benefits. The second option, a non-HVAC certified person, would make around $35,000, with the school system still having to pay for HVAC maintenance.
“I would like to see (the two options) side by side,” Jones pointed out.

“What you have to think about, too, is the HVAC person is actually going to encompass $60,000.  If we don’t (hire an HVAC-certified person), we’re paying $80,000 (for separate maintenance on HVAC), Sutherland said.”
There also are continuous maintenance issues throughout campus, she added.
Sutherland reasoned that if an employee could keep all HVAC units maintained across campus, that would reduce the failure  of units which would have to be repaired or replaced.
The new personnel in grounds and maintenance would not only place a person at each campus, but would also eliminate the need for student workers in the summer months, which cost the system $12,000 last year, Sutherland explained.
“This would be a permanent position that would alleviate that,” Sutherland pointed out.
“We’re spending a million and a half dollars to build a barn for the visiting  team,” spoke out board member Barry Burleson. “Maybe we should be replacing all of our air units or something.”
“We have replaced a lot of them,” noted board member Kris Burleson.
Barry was referring to discussion of a capital improvement project to build a new concession stand on the visitors side of the football stadium.  The building would also house restrooms, two locker rooms to be used by both home and visiting soccer and track teams and visiting football teams, a weight room for Haleyville Middle School, storage and a mechanical area.
This 2,000 square foot facility, which is only in the discussion stages, would be located where the present restroom facility is on the visitor’s side of the high school football stadium.
Currently, school officials are unsure of the total cost of construction for this facility, although it would be constructed from the $2,373,128.24 bond funds the system received through the Investing in Alabama’s Future Act, passed by the Alabama Legislature in 2020.  These funds are earmarked for capital improvement projects, school officials said.
The school was notified in November, 2020, they were approved for the Series Bond funds and have three years to spend the amount, noted Chief School Financial Officer Candy Marbutt.