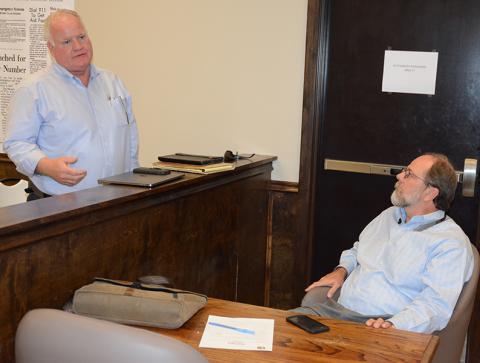 HALEYVILLE - Several areas in need of paving are being eyed in the industrial section of Haleyville, now that the city has learned they can apply for up to $150,000 in a revolving loan project through the Northwest Alabama Council of Local Governments.

NACOLG can provide up to $150,000 in a revolving loan program for paving projects strictly for downtown areas or businesses, Haleyville Mayor Ken Sunseri explained during the city council’s regular meeting Monday, Aug. 20.

City Engineer Calvin Cassady further explained that several areas are being considered such as Old Hamilton Road, from Jimson Manufacturing to Ridgecrest, which has been priced at roughly $73,000.

Also, Alabama Avenue from Highway 129 to Dolphin Road on the east side of the railroad track is also being considered, if the city is approved for this revolving loan. This project would cost $78,000, he noted.

A section on Sam Letson Road from the turn area to Boartush all the way to Highway 13, costing $82,000 was also mentioned by Cassady.

“That’s a section of road that has not been paved in years,” said Cassady.
Boartush Road was last paved around 1996-1997, he added.

“When we paved that, we turned it right there going to Boartush because of the traffic on (Highway) 13.  That intersection down there across the railroad tracks is bad,” he said.

Cassady based on this list, recommended the Old Hamilton Road, Alabama Avenue and the short section to the Boartush road be paved, at a total cost of about a $160,000 to $170,000.
The pay back period on the line would be about five years, with a three percent interest rate, Sunseri said.

“I’d like to go ahead and do the paving,” Sunseri said.

“No, because we are going to be short on cash,”  responded Sunseri. “We have another project, which is a storm water project, $225,000.” He was referring to an area of 9th Avenue behind the former Haleyville Loan Office.

Sunseri added the city is also  trying to get a hotel and do other projects as well.

The council voted to apply for the revolving NACOLG loan.

Concerning this discussion of paving, resident Valeria Taylor spoke out she had a person come by to talk about concerns with the city.

“I recommend they come up here and discuss it at City Hall,” Taylor addressed the mayor and council.

The person who came by to talk with Taylor noted he voted on the mayor and council based upon their promise they would clean up the south Haleyville area, knocking down the old structures that she described as being “rats nests and drug dens,” Taylor told the mayor and council.

“...They would like for the folks to come down there and just say hello to them. Let them see you. Let them know that you care,” Taylor continued. “Let them know they feel they are a part of this town.”

She also suggested each council member be assigned a different section of town, in order to give them someone to call if they have a concern.

Among other council business, as part of the agreement to provide security fencing at the Haleyville Airport, a study is being required to check the habitat of animals around the airport, Cassady informed the mayor and council.

“We have to put up a fence that specializes for that,” Cassady said. “The fence may have to be buried, six foot above and three foot below.

“It’s a new procedure that FFA is requiring us to do,” Cassady noted.

A study costing $2,000 is being done to determine the types of wildlife in that area, Cassady further explained, adding the fence would be on or near the property line.

The council, upon hearing this, voted to approve the airport agreement.

Based on a letter the town received from the Alabama Fire College, the town must have a certified officer to be fire chief, Mayor Sunseri said.

State law stipulates that all fire chiefs have a year to complete their qualifications, the mayor explained.

Terrell Baccus has served as acting fire chief since Phillip Weaver retired, working part time recently until the town could appoint a replacement.

Council member Richard Bittinger asked Sunseri if they could request an extension.

“We have a year and the year is up next month,” responded Sunseri.

“They have to go to the fire college. I can call and see if they will give us an extension. Their policy says one year. State law says one year,” Sunseri added.

“I know what the policy said,” Bittinger responded. “But I’m asking for an extension after that.”
The council decided to table the matter, so no action was taken.

Among other business, the council accepted the resignation of Austin Lewis as officer with the police department. Lewis has accepted a position as patrolman for the town of Bear Creek.

The town has now hired Eddie Collins, who has been working with the Winston County Sheriff’s Office, as police officer, effective Aug. 27, at a rate of $14 per hour. After nine months, the pay is increased to $14.50; then $15 after one year. After two years, the pay would increase to $15.50.
The council also took action to reappoint Glenn Roberts to the Housing Authority Board.

City Attorney Jeff Mobley certified that the matters to be discussed would meet the requirements under the Open Meetings Act.

“No decisions will be made or votes taken,” Mobley stated, after which the council exited the courtroom to assemble in executive session, which lasted at least one hour.