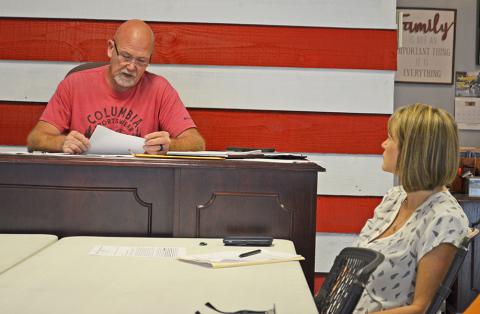 Bear Creek Mayor Rob Taylor announces that town clerk Kay Wiginton, seated right, had verified the signatures turned in on a petition, which means the town can legally can have an election for voters to decide if alcoholic beverages can be sold or distributed in the town limits.

BEAR CREEK  -  Figures from the last census showed the Town of Bear Creek exceeded 1,000 in population, meaning the town now qualifies - and is preparing for - an election to allow voters to decide if alcoholic beverages can be sold or distributed in the town limits.
The town council voted Monday, Oct. 3,  to have the wet/dry referendum election on Tuesday, Nov. 15, which will be after the general election.
Making a motion to have the election on that  date was council member Eric Mills, seconded by Alex Price. All council members voted in favor, including Mills, Price and Eric Loden. Tom Misner was absent from the meeting.
The council met Wednesday, Sept. 28, in a special-called meeting, during which they voted to officially have the wet-dry referendum placed on the ballot for voters in the town limits of Bear Creek to decide.  Price made the motion for immediate consideration to have a wet/dry election, with Misner seconding, and all voting in favor.
Bear Creek’s population, according to the last census, was 1,057.  Code of Alabama Section 28-2A-1 reads that  a petition gathering the names of 30 percent of the number of voters in the last general election of the municipal election must be filed with the town clerk or governing body of the municipality. The governing body must then call a municipal option election.
Mayor Rob Taylor announced at the council’s Sept. 19 meeting that the petition had met the requirements and that all signatures were legitimate voters in the town limits.  The petition, which was turned in at the first of September, needed 88 certified signatures and received 107 certified signatures, according to Clerk Kay Wiginton.
Wiginton explained a few people signed the petition twice, so the extra names could not be counted, nor could any voter who was officially not in the town limits.
“I got the voter registration from the (county) courthouse first,” Wiginton stated. “I compared their names and made sure they were registered voters.”
The law states that the municipal option election shall be held at the time of the next primary, general, countywide or municipal election following the date of the filing of the petition.  However, the election cannot be held less than 30 days from the filing of petition.
Notice of the election shall be given by the governing body of the municipality at least three weeks before the election in a newspaper or by posting the notice at city hall.
Once the issue is printed on the ballot, it should read, “Do you favor the legal sale and distribution of alcoholic beverages within this municipality? Yes....No.”
The town will have to spend around $2,328 for the election, including ballots, voting machines and poll workers, as well as any advertisement costs, according to Wiginton.
At an earlier meeting, Taylor explained to town council members the petition had been certified.  He then asked the council for a motion to move forward with the referendum process.
“Do you have to have a vote on that to move forward,” council member Chris Hyde asked.
“I don’t think we can stop it,” council member Eric Loden noted.
“If the citizens have created a petition, I don’t think we can stop it,” Taylor agreed. “On this, you are not voting for it. You are voting to allow the people to vote against it, if they want to.  If the citizens present a petition, it is not for us to decide whether or not to move forward.”
“I can’t purposely put something out there for someone to do and stand up on my Christian beliefs.
“If they are counting on my vote to pass it, I couldn’t do that,” Hyde added. “I’ve been going to church now for 30-something years.  I just can’t put (alcohol) out there easily accessible and sleep good at night.
“It is everywhere already,” Hyde continued. “But it wasn’t something I had a hand in, and I don’t want to have a hand in being OK with it.
“I can’t be OK with something that I don’t believe in doing myself,” Hyde concluded.