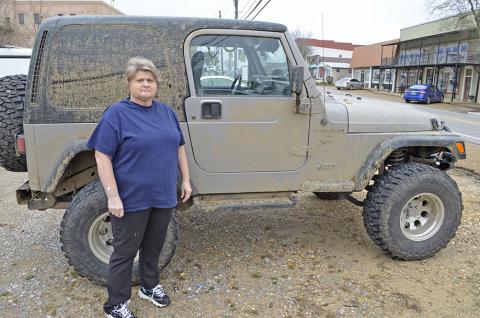 Theft victim Lisa Hamby shows the Jeep Wrangler that has been returned to her after being stolen from the yard of her residence.

HALEYVILLE       - Law enforcement officials are needing the public’s help in finding a subject that was involved in the theft of Jeep Wrangler from a residence on County Road 3433.
Warrants have been signed charging Kenneth Keith “K.K.” Kennedy, 43, of 1618 7th Avenue South, Haleyville, with theft of property first degree regarding the theft of the Jeep, according to Winston County Sheriff’s Office Investigator Jacob Eward.
However, Kennedy is still at large, and law enforcement are seeking his whereabouts in connection with the stolen vehicle case, according to sheriff’s officials.
Those who may have seen Kennedy or have any knowledge about his whereabouts are urged to contact the Winston County Sheriff’s Office at (205) 489-2115.
Kennedy also faces active charges in a separate case, where a black Ram 2500 was stolen from A&H Woodworking in Haleyville earlier this year, being recovered at a residence in Bear Creek, Eward noted.
Also arrested at the scene,  where the Jeep was recovered in Marion County, for two failure to appear warrants,  was Cotey Speyer, 30, of 28964 Highway 24, of Russellville, Eward added.
Around 4 p.m. Dec. 8, Sheriff’s Office Deputy Eric Faith was dispatched to a residence on County Road 3433 in reference to a stolen vehicle, a 2001 Jeep Wrangler, noted Eward.
Faith spoke with resident Lisa Hamby, who stated she had left the residence around 7:30 a.m. that morning to take her daughter  for chemotherapy in Birmingham, only to return around 1 p.m. and discover the Jeep was missing, authorities said.
Hamby recalled the Jeep’s keys had been left under the seat.
“They had to plunder through to find it,” Hamby said.
Items that were inside the Jeep when it was taken included some jackets, a jack, towing chain and a bouncy house she was storing there, which was supposed to have been for her grandson, she said.
“It’s gotten bad. They are going to have to do something,” Hamby pointed out, citing other thefts in her area.
Hamby also noticed her husband’s tool drawers on the porch had been opened as well as entry made into a camper, where items were ransacked, but no additional items were reported stolen, sheriff’s officials said.
Faith was able to get a picture and description of the stolen vehicle as well as the vehicle identification number and tag number, entering the information into the National Crime Information Network as a stolen vehicle, Eward stated.
The information had also been passed on to the Haleyville, Arley and Double Springs police departments and  sheriff’s offices in  Walker, Cullman, Franklin, to be on the lookout for the stolen Jeep Wrangler, Winston sheriff’s officials said.
“The more eyes you have, the more likely you are to find missing items in a timely manner,” Eward stated. “This was recovered within 48 hours of it being stolen.”