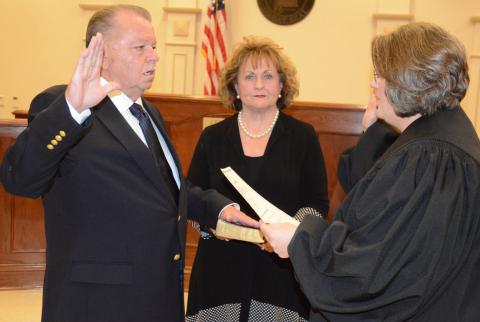 DOUBLE SPRINGS - Horace Moore, a veteran of law enforcement the past 30 years, was officially sworn into office Monday, Dec. 30, as Winston County's sheriff, respectfully replacing Tommy Moore who had to resign due to health reasons.

The ceremony, held in the upstairs courtroom of the Bobby Aderholt Judicial Complex,  was attended by family, friends as well as officials from throughout Winston County, various municipalities and law enforcement from multiple counties.

Performing the swearing in was Winston County Probate Judge Sheila Moore, with Horace Moore raising his right hand to take the oath of office, with his left hand on the Holy Bible held by his wife Patty Moore.

After the swearing in ceremony, Moore pledged to be fair and honest in his dealings with the department and the public, striving to keep the integrity left in place by Tommy Moore, whom he had the utmost respect.

After the ceremony, the public was invited to a reception held in the old courthouse next door. Watch for more in-depth story and complete coverage of this event in the Alabamian.

During his law enforcement career, Moore has performed all duties required of a patrol officer, graduating from both the Winston County Citizen Academy and Reserve Academy.