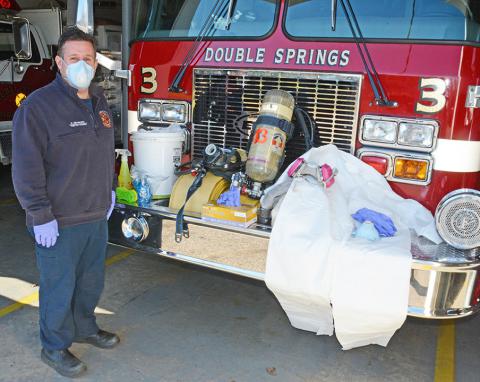 Lt. Erik Gilbreath of the Double Springs Fire Department, shows the protective gear they take to scenes and use if COVID-19 is present.

WINSTON COUNTY    - The recent uptick in COVID-19 cases not only in Winston County, but the entire area has created an impact on first responders through either positive cases of the virus among their ranks or having to go into quarantine due to exposure, affecting the very ones people depend on in emergency situations.
Lt. Erik Gilbreath of the Double Springs Fire Department has recently returned to work following two weeks after testing positive for COVID-19.
“My symptoms were very mild,” Gilbreath said.  “It was nothing more than a head cold that affected me, but I am just one person. It affects everyone differently.”
COVID-19 is proving to be a tricky virus, affecting people in different ways. Some COVID patients require hospitalization for breathing issues, while others like Gilbreath have milder symptoms that go away after just a few days.
“We’ve had several in our department who have had it,” Gilbreath pointed out. “It’s affected them differently, as well. Some of them feel like they have the flu. Some of them, it hit really, really hard.  They are still suffering some symptoms or some after effects from it.
“It affects your taste and smell.  Some of them still don’t have a whole lot of taste and smell right now,” Gilbreath noted.
When Gilbreath tested positive, he immediately went home into quarantine, with fellow firefighters spraying disinfectant at the fire station and closing the office where he had been working.
“I had to quarantine myself, my wife, my two kids, and anybody we were around that weekend,” said Gilbreath.
Gilbreath had the COVID test toward the end of the week, but did not get the results until the first of the following week, so that meant he needed to be quarantined until he found out.
The quarantine process is used to keep someone who might have or may have been exposed to COVID-19 away from others. Those in quarantine should remain isolate from others, staying home 14 days after their last contact with a person who had COVID-19.
Watch for a fever, cough, shortness of breath and stay away from others, especially those who are at higher risk of getting the virus such as older adults and people with medical conditions that make them more susceptible to having serious affects from the virus, such as high blood pressure, diabetes, heart disease or lung disease.
Even if a person tests negative or feels they have no symptoms, someone who has had contact with someone with COVID-19, should go into quarantine since symptoms may appear 2-14 days after exposure to the virus, according to the Centers for Disease Control.
Gilbreath admitted he should have gone into quarantine when he got tested.
“Being stubborn and bullheaded, I didn’t  think I was sick ,and we visited with some family,” Gilbreath pointed out. “It messes folks’ daily routines up, especially if you have tested positive, and you don’t know you have tested positive.”
At least three members of the Double Springs Fire Department have tested positive for COVID-19 within the past several weeks, according to Gilbreath. However, that number does not include any resulting quarantines.
“I don’t think we are passing it around. I think once we figured out we were sick, we stayed away,” Gilbreath noted.
Gilbreath estimates he could have contracted COVID-19 as a first responder on a medical call when he was doing vital signs on a patient who in the process informed him he had COVID-19, he recalled.
“We tried to keep a six-foot distance, and once the patient was loaded in the ambulance, we  decontaminated ourselves. We sprayed ourselves down with cleaner,” Gilbreath stated.
Positive COVID-19 cases and/or quarantines among the fire department staff can create a hardship on first responder calls, Gilbreath pointed out.
“That kind of hurts us when we’ve got calls and we’ve got people who can’t come because they are in quarantine,” he said.
In such cases, fire department members respond that normally might not go on other calls, Gilbreath said.
“They are going to have to really step up and continue to show up,” he said.
“I was trying to make every call up until that point,” Gilbreath said regarding having to go into quarantine. “It’s a burden on us, especially during the day because there are so few of us in the day time who are available to run calls.”
At least two of Gilbreath’s family members are having issues related to COVID-19, he explained.
“It’s affected them differently than it affected me,” he said.

How first
responders must
approach scenes

First responders have to be more cautious than ever before when responding to calls, especially where the home occupants may have COVID-19.  That means first responders wear a mask on all medical calls, regardless of whether there are COVID symptoms present.
“We don’t know what we’re going into a lot of times. 9-1-1 can only get so much information before they hang up,” Gilbreath said. “They try their best to get as much information as they can to us, so we can get prepared for it.”

Winston County Sheriff Horace Moore reported his office has also faced its share of concerns due to COVID-19.
“It has really set us back.  My goals were to be three or four months ahead of where I am,” Moore stated, “but because of COVID, it has slowed us down.”
When the sheriff’s office arrives at a scene, they ask the home or business’ occupant to come outside unless they have a disability preventing them from doing so, the sheriff explained.
“If they are sneezing or coughing, if it is not an emergency, we come back, and they call us back when they get well,” Moore said. The sheriff’s office has also taken a few reports by phone, he added.
“If it’s a life or death situation or a serious injury, we go and do our job,” Moore said. “We don’t back off from any of it if it’s an emergency situation.”
The sheriff’s office has recently been on a call where a man who was mentally disabled was also infected with COVID. The sheriff’s office took measures to disinfect themselves after contact with that person.
“Fortunately, we have been in real good shape,” Moore said.“I’ve only had two deputies be off from work with (COVID). One tested positive. The other, it was in his home.
“As short handed as we are, it puts us in a situation where we may be a little longer getting to calls,” Moore continued. “I try to keep two deputies out just about all the time.”
As far as the kitchen and the jail, Moore stressed those areas are thoroughly cleaned and disinfected  with foggers used, as well as disinfectant spray.
“We do it regularly,” he stressed.
When an inmate is brought into the jail on the sheriff’s approval,  that inmate’s temperature is checked. Sheriff’s officials alo ask if that inmate has any symptoms.
“Once we get to the jail, once they step out of the car, we take their temperature,” Moore said. “We make sure they don’t have any symptoms of even a cold. If they do, we quarantine them.”
Once that inmate is brought into the building, they are put in a holding cell and monitored with temperature checks for 24 hours.
Once the inmate shows no signs or symptoms, they are put into a cell with the inmate population, according to Moore.
“We’ve been blessed because we have not had any COVID in the jail,” Moore stressed.
Moore stressed COVID-19 should be taken seriously.
“It’s a life and death situation,” he said. “Bear with us during this thing. Our response time might be a little longer. It might be a little different.”

Dispatchers have a checklist of
questions

Tim Webb, director of the Winston County E-911 center in Double Springs, noted dispatchers must now follow a different protocol when it comes to calls that come in, especially those related to COVID-19.
“We have seen an increase in the past couple of weeks, especially in the last week and a half, a big increase; the call volume hasn’t increased a tremendous amount, but the percentage of call volume where people in households either  have symptoms of COVID or know they have tested positive,” Webb pointed out.
Dispatchers now have a list of questions they are required to ask, especially when callers are notifying emergency 9-1-1 that they either have symptoms or have tested positive and need further medical attention.
Dispatcher are asking callers if within the past two weeks they have experienced any flu-like symptoms. If the person either has symptoms or has tested positive, dispatchers  contact the necessary emergency responders privately by sending out a message for them to contact dispatch.
When emergency responders contact dispatch, the situation is explained to them, so the responders will know the situation in which they are entering, Webb further explained.
“If it is something where they are basically needing a transport, it is not a life and death situation  and we know there is COVID present, we want to make sure all of the first responders and EMS providers are well informed and not subjected to walking into something that could possibly be not good,”  Webb said.
Gilbreath noted the fire department recently received a call where both the patient and the person who called dispatch were COVID positive.
“We ask, are you COVID positive? Have you been around anyone who has tested positive for COVID? If they have or if they are, then we take the necessary precautions,” Gilbreath said.
When dispatch recently toned the fire department out to a scene where COVID-19 was possibly present, they called them separately from dispatch and told them they needed to call 9-1-1 for more information before they approached the scene.
In this case, the fire department suited up with air packs at the scene, Gilbreath said.
Medics with Regional Paramedical Service had requested assistance because the patient was unresponsive  and they needed lifting assistance due to stairs at the residence.
On any medical call, fire department personnel take what is known as body substance isolation precautions.
This includes gloves, goggles and a mask. “We have really stepped up our isolation,” said Gilbreath. “We try to wear masks and gloves with all patients, regardless of what (type of call) we’re running on.”
Gilbreath admitted that these situations constitute the “new normal” to which people must adjust, especially with soaring COVID-19 cases.
“It is worse now than it has been in the past several months,” said Gilbreath.
Gilbreath said that COVID-19 is real and should be taken seriously.
“I have two small kids at home.  I am going to wear a mask when I’m on calls. That’s just another layer of protection,” he said. “I don’t want to bring it home to them.”
If Gilbreath has been on a scene where he learned or feared that someone was COVID positive, the first thing he does after clearing the scene is go back to his house, spray down his vehicle, removes clothing in a separate area of the house away from his family so the only person touching the clothes is himself.  He then takes a shower, puts on clean clothes and hopes for the best, he added.
“Before (I tested positive), I didn’t think much of it other than I just needed to be careful,” Gilbreath admitted. “After having it, I see how it affects not just me. It affects everybody else I have been around.”

At the E-911 center, none of the employees have tested positive for the virus, which, with two dispatchers, could have serious effects, according to Webb.
Employees have been tested since the onslaught of COVID began rising, but those tests have been negative, Webb explained.
“We still have the facility closed to the public,” said Webb. “We haven’t diminished any services. Most everything we can handle over the phone.”