BRILLIANT - The Lynn Bears picked up where they left off earlier in the week in their battle on the baseball diamond against Brilliant, this time taking them down on the road 9-1.

James Ferrell stands in front of a possible grave which has sunken in. He has also flagged the possible grave along with many others in the area.
BRILLIANT - Isolated between Highway 129 and Main Street, there is a small stand of woods about one-third of a mile in length. Stuck in between the roads on a knoll, in the city limits still, is an old cemetery which has been neglected for a number of years. Only three tombstones exist in this cemetery of forgotten souls, with others containing small rocks.
MARION COUNTY- There will be a police-escorted classic car cruise throughout Winston and Marion counties, Saturday, Sept. 19, all for a very good cause. 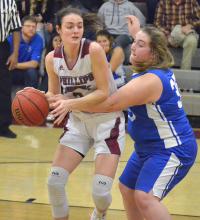 Ally McCollum battles to the net.

BEAR CREEK - The Phillips Bears and She Bears swept Brilliant in action Tuesday, Dec. 17, at PHS.
The Bears won by a score of 75-72, with the She Bears taking a commanding win 63-22.
Ken Edwards led the scoring for Phillips with 17 points. Hayden Hulsey was close behind with 15,  Collin Grace, 9 points, Brodie Coan, 7, Pol Baldrick and Tanner Markham each had 6 and Jose Aagon, 4.
Gracie Hallman lead the She Bears at the net with 22 points, followed by Alli Temple with 19. Ally McCollum added 8 points, Mary Ashton Hyde, 7, Allie Veal, 5 and Morgan Lauderdale, 2.

BRILLIANT -  Meek High School split Friday’s , Nov. 15, game with Brilliant. The girls’ game saw Meek winning 39-15, with the boys losing in a close one 58-53.
Jarrett Benson was the high scorer for the MHS boys, with 22 points. Hannah Taylo was the high point getter for the Lady Tigers with 15. 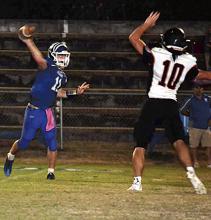 Pictured above Tommy Daniel (10) goes up to bat down a pass by BHS quarterback Timmy Bryant.

BRILLIANT - Rushing for over 200 yards, the Brilliant Tigers racked up over 400 yards of total offense as they powered their way past Meek High School 30-6 for their first region win of the season.
The hosting Brilliant Tigers built a 22-6 lead in the first half and cruised to the win over the final two quarters using their traditional ground-and-pound style offensive tactic. 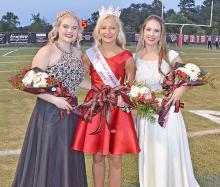 LYNN - The Brilliant Tigers came to Lynn Friday night and turned the Bears' homecoming into a nailbiter, keeping all the fans on the edge of their seats right up until the end of the game, when Lynn pulled it off 19-12.
Lynn opted to receive the opening kick-off, setting up shop on their own 40.  After a gain of 5 by J.T. Linley, Griffin Lynn converted on third down with a 13-yard run, moving the chains to the Brilliant 43-yard line.  Carson Legg kept the drive going, getting a first down at the 32-yard line three plays later.

LHS Lady Bear Kendra Hannah passes the ball to set up the kill.

BRILLIANT - The Lynn Lady Bears took a match in three straight sets over the Brilliant Lady Tigers on Tuesday, Sept. 10.  Scores were 25-22, 25-23 and 25-23. The match was held at BHS.
Submitted stats for the Lady Bears include: kills, Ella Brown, 8; Lexi Adamson, 10; service aces: Kendra Hannah 5. No stats were available for BHS.

BRILLIANT - A single-vehicle crash has claimed the life of a Winfield woman.
Subscribe to Brilliant